Pictured all over the world for its giant stone head statues, most people will know the island’s indigenous name of Rapa Nui as ‘Easter Island’. Despite its fame, Rapa Nui is one of the most isolated inhabitations on Earth. It has over 3,000 residents today, even though it lies over 2,000km away from any other civilisation! The island is a national park, and its place on the UNESCO World Heritage Site is well deserved; Rapa Nui is home to the moai stone figures, and much more. 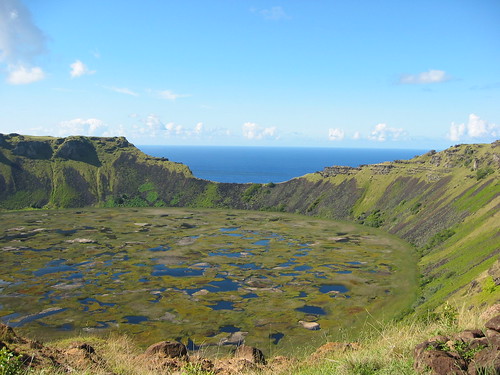 Looking down into the Crater of Rano Kau

The Volcano of Rano Kau is now extinct, meaning that there are no more dangers of eruptions. Where lava and molten rock once filled its enormous crater, now there are fresh water lakes and luscious grassland. Standing at 324 metres tall, the volcano is being slowly eroded by the ocean on its coastal side, with the island’s international airport at the base of its northern slope.

This gigantic and truly magnificent natural landform is something that all tourists visit when travelling to the island, and unsurprisingly so.

Because of the shelter it gets from the wind and wet, the crater even has its own micro climate. It spans almost a mile across, and is home to vines, figs and other plants that flourish in its rich and fertile volcanic soil.

Anakena is one of only two of the island’s beaches; most of the coastline is rocky, and cliffs have been formed in some parts because of the Pacific Ocean’s eroding power. Legend passed down through word of mouth from the island’s people states that Anakena was the landing place of Rapa Nui’s first settlers. According to local folklore, Hotu Matu’a was a Polynesian chieftain, and let his tribesmen paddle to the island on two canoes!

Anakena also has two ‘Ahus’; a stone platform on which the famous Moai statues were mounted by their creators. The first Ahu has just one moai, while the other has six. Many of the Ahus were restored by archaeologists in 1910, and the 1950s, many had fallen from their platforms and tumbled onto the beach. Having been carefully restored, they now stand watch over the very first entrance to the Island.

The beach is not only rich with history, but is also a picturesque place to visit. With white coral sand, and the Pacific Ocean stretching far beyond the curve of the horizon, tourists can leave their vehicles in the car park, and enjoy its unparalleled beauty. 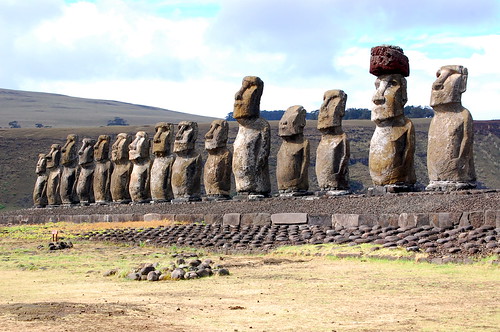 The Easter Island Statues are world-renowned, standing firmly on their stone Ahu.

Ahu Tongariki is one of the largest on the Island, and over 15 Moai stand on its platform. The fascinating stone figures are the only ones on the island who all face out towards the ocean, and even today, they astound all who see them. The Polynesian settlers established the tradition of sculpture and architecture in their own style, and because of the island’s isolation, they had no influence from the outside world.

It is thought that these powerful monuments, along with shrines and ceremonial buildings, were erected from the 10th to the 16th century. Originality and imagination must have been flowing in abundance in the early inhabitants as there are no statues quite like them anywhere else on Earth!

Rapa Nui National Park has a history that is completely unique; the island holds many mysteries and natural wonders that archaeologists and scientists still marvel at today. Despite its extreme isolation, the island’s visitors are rewarded with incredible sights and sounds as well as being wooed by the traditions of the local people. Although you may not choose to reach Rapa Nui by canoe, the international airport welcomes thousands of visitors each year. Why not make this once in a lifetime journey, and have your own incredible experience of Easter Island?