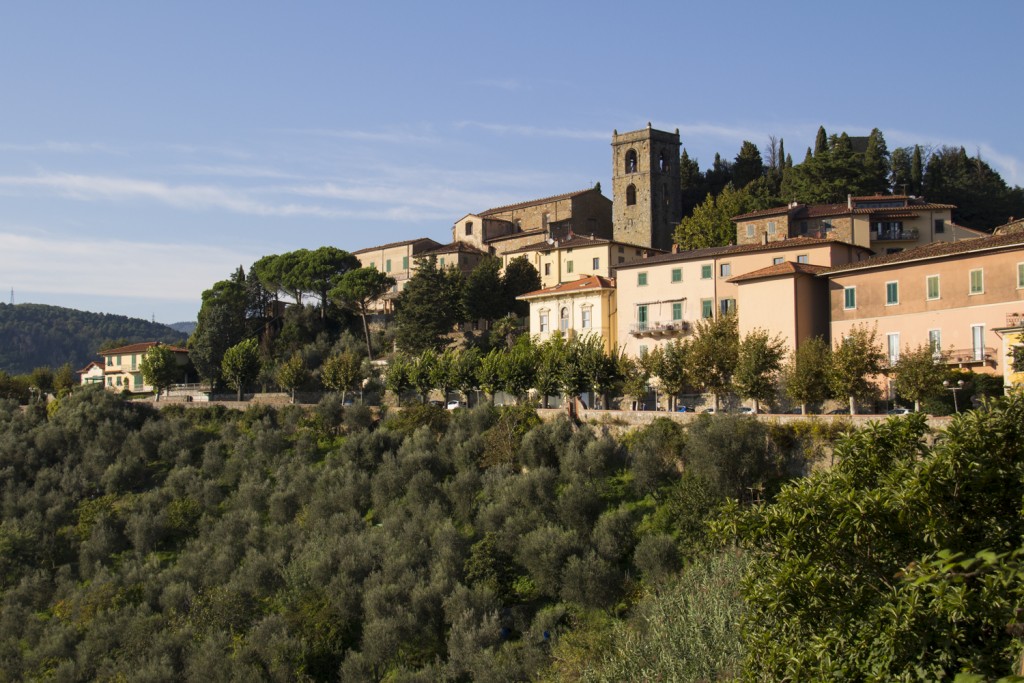 This year I will be celebrating the New Year on the streets of Montecatini Terme a spa town in Tuscany.  The streets will be alive with people, music and fireworks as Italians take this festival very seriously.   Once the celebrations are over and the head cleared by a bracing walk through the park and maybe up the hill to explore Montecatini Alto  perched two hundred and seventy nine metres above us we can indulge in some serious sight-seeing as the town is well-placed to explore some Tuscan favourites. 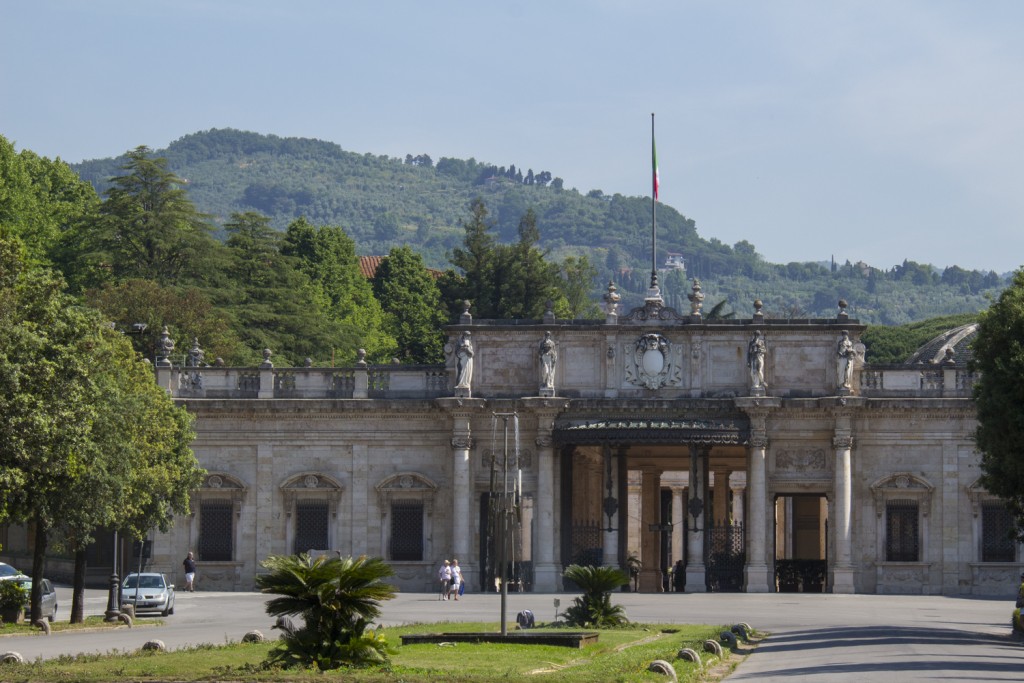 For most visitors to Tuscany Florence  will be top of their list as this beautiful city is well-worth a visit.  Winter is a good time to be there as the main attractions remain open throughout the year and will not be so crowded.  The elaborate Cathedral, Santa Maria del Fiore, is famous for both its bell tower (campanile)  and its dome or cupola both of which offer a challenge to visitor who want to experience the best views over the city.  Construction of the bell tower was begun by Giotto in 1334, carried on after his death by Andrea Pisano, and finished in 1359 by Francesco Talenti.  Decorated with white, red and green marble it is considered to be the most beautiful in Italy and was probably created to complement the exterior of the cathedral which it mirrors rather than to perform the function of a bell tower.

I will be looking for a different experience and will be hoping to walk through the corridor built by Giorgio Vasari  linking the home of the Medici family, Palazzo Pitti their offices for administration the Uffizi  (now a famous art gallery) and the Palazzo Vecchio without having to go outside.  Vasari took just five months to build the Vasari Corridor that measures one kilometre and has recently been restored and is now open for guided tours.  Having walked to the Palazzo Pitti I will be happy to spend some time exploring the building which houses several museums as well as the royal apartments before returning to Montecatini Terme on the train. 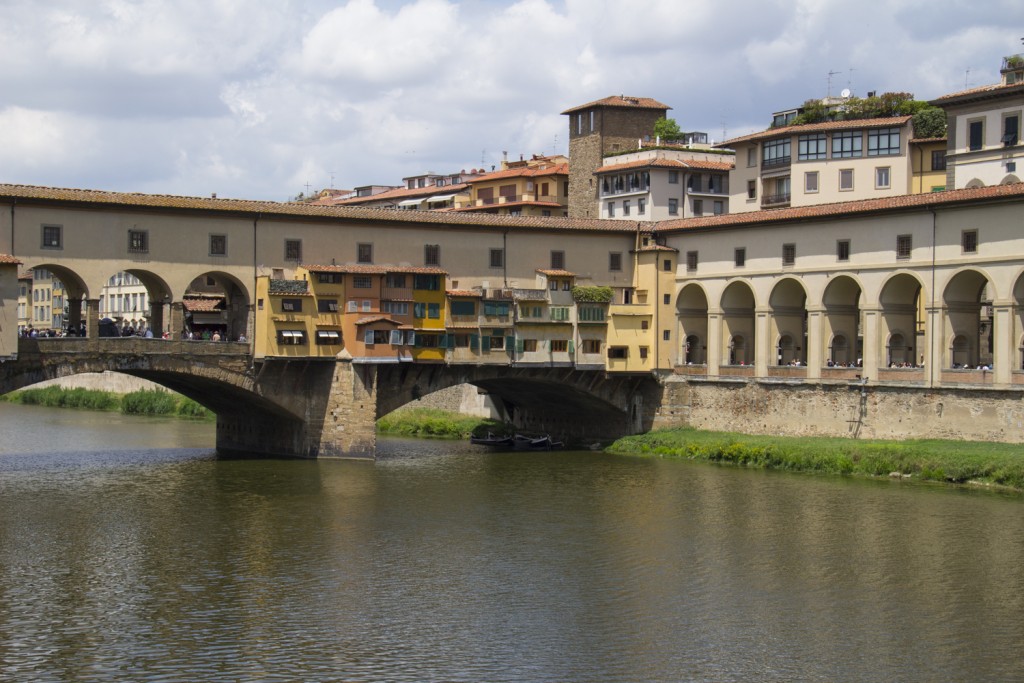 Ponte Vecchio with the Vasari Corridor above it in Florence, Tuscany in Italy

Siena is not accessible by train but the tourist information office and most hotels offer bus tours to visit the home of the famous Palio which is essential to the life of the Contrade and the Contrade (administrative districts) in turn are essential to the life of the town.  Even though this race is run twice in the summer there is evidence everywhere of the last winners who celebrate for the twelve months following their victory – flags depicting their insignia (either a real or mythical animal) flutter in the breeze during the day and decorative lamps illuminate the narrow cobbled streets at night.

After visiting the site of the Palio, the Piazza del Campo, we will make our way to the Piazza Duomo where we will have a difficult choice to make.  Do we buy the composite ticket to visit the cathedral and four other linked sites including the opportunity to climb to the top of the abandoned façade, the panorama dal facciatone for good views over the city and surrounding countryside or do we visit the old hospital of Santa Maria della Scala in the same square.  This building operated as a hospital for over one thousand years and it was not just the first hospital to be built in Tuscany but one of the first hospitals to be established in Europe.  Set up on the Via Francigena or Pilgrim’s Way from Santiago de Compostela in Spain to Rome its initial purpose was to care for sick pilgrims who passed through the city, to look after the poor and to provide for abandoned children.  Difficult choice – perhaps a second visit could be the answer but we had other towns to see including the walled city of Lucca. 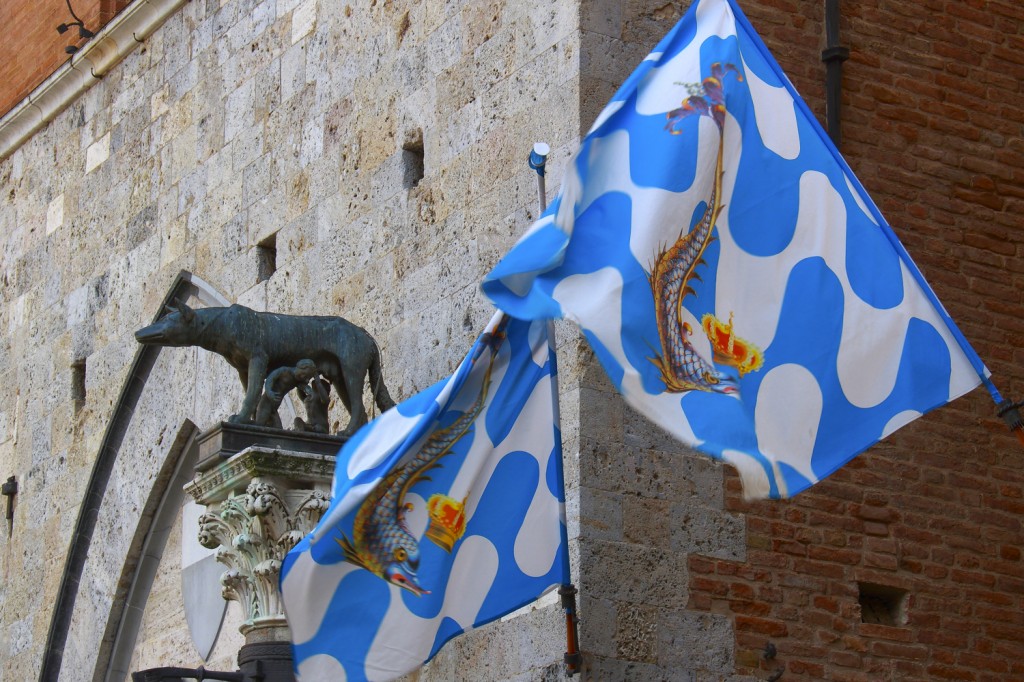 Easily accessible by train Lucca  is one of my favourite cities because it has so much to offer including a good walk around its encircling walls  intact – historic evidence of a small, proud city standing firm against its more powerful neighbours and in particular Florence.  These walls are topped by a tree-lined promenade with lovely views of the city and the countryside around it. Trees were planted on the top of them to stabilise the earth within the brick walls and four species were used in succession – plane, lime, ilex and chestnut. It was originally intended that the nobility would be the only ones to enjoy this bonus but despite many warnings against trespassing in what was a military zone the walls soon became a popular place for a walk, meeting friends or relaxing on the bastions and remain so to this day.  One of seven city gates, Porta San Pietro, is the best place to start being close to the station and not far from the town centre.

Not far from this starting point one is afforded an impressive view of the back of the Cathedral of San Martino and a bit further along the pretty Comunale Orto Giardini di Lucca (public botanical gardens) with its pretty centre-piece of a small lake carpeted with water lily leaves.  Having assessed the possibility for some afternoon sightseeing from the walls I would probably head for the unusual Torre Guinigi.  This typical example of Romanesque-Gothic Lucca architecture was built by the Guinigi family, rich merchants and leading personages of the town and is crowned by holm oaks probably to allow them to exceed the statutory height of private towers during a period when numerous towers, emblems of prestige, were springing up within the walls of Lucca.  Or maybe the Torre d’Ore (clock tower)  where I might see the ghost of Lucchese girl, Lucida Mansi, who is said to inhabit this tower.  She sold her soul to the devil in exchange for three decades of youth and beauty.  When the devil came to collect his due on 14 August 1623 Lucida climbed up the clock tower in an attempt to stop time but the devil caught her and took her soul.  Or I might just make my way to the Piazza del Anfiteatro for a leisurely lunch at one of the restaurants that ring this charming square while mulling over the possibilities for the next day – Pistoia maybe? 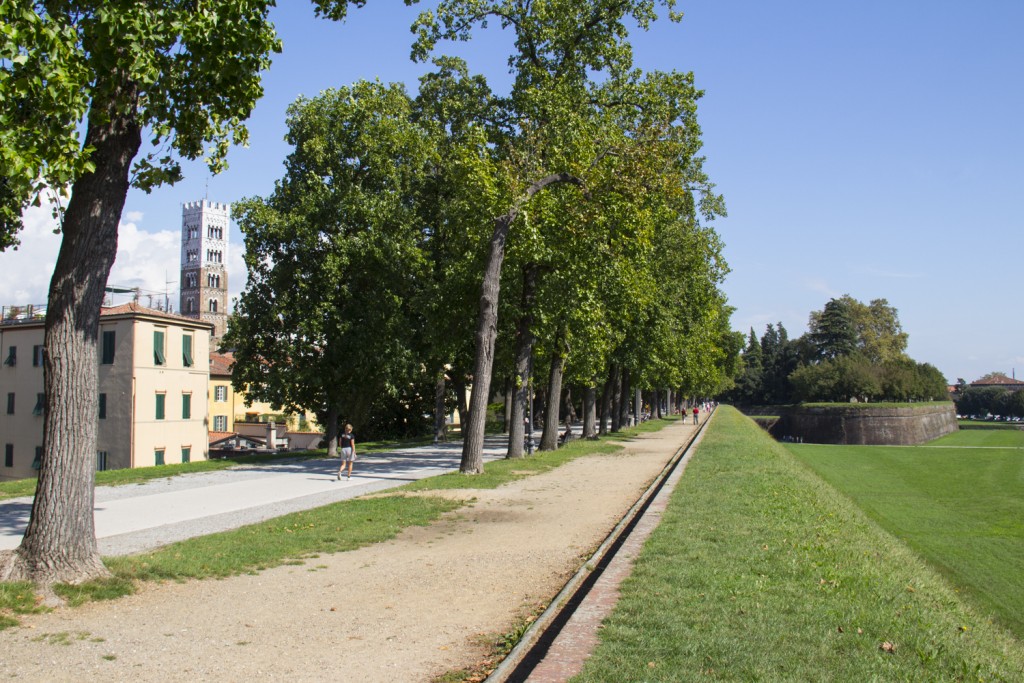 Guide books tend to dismiss Pistoia in a few lines but for me it is one of the most interesting towns in Tuscany and the only time it gets really crowded is on a Wednesday, market day, when the main square, Piazza del Duomo and the surrounding streets are filled with stalls piled high with merchandise.  There are several architectural gems here including the Duomo di San Zeno with its unusual façade that features a seven-arched portico and three doorways, the Museo Capitolare (Cathedral Treasury) the bell tower, the elegant octagonal Battistero di San Giovanni in Conte and the Palazzo del Comune that houses the fascinating Museo Civico.  But all obscured by market stalls but as the market only lasts half a day the morning is a good time to visit the town’s new tourist attraction the Ospedale del Ceppo where an underground tour of the town starts.

A famous terracotta glazed frieze,  most of which is the work of Santi Buglioni in the della Robbia style, stretches across the front of this old building and is currently being restored.  The tour starts in an underground passage inside the hospital and follows a maze of tunnels that stretch beneath the town and at one time featured local industries that used water from the River Brana that had been converted underground.  Originally these tunnels went from the old port of Pistoia to its defensive fort, Fortezza di Santa Barbara but so far only 650 metres have been opened up and the rest of the journey to fort, across the attractive Piazza della Resistenza inside the Parco Pubblico has to be done on foot.  I hope I will be able to persuade my companions to join me there. 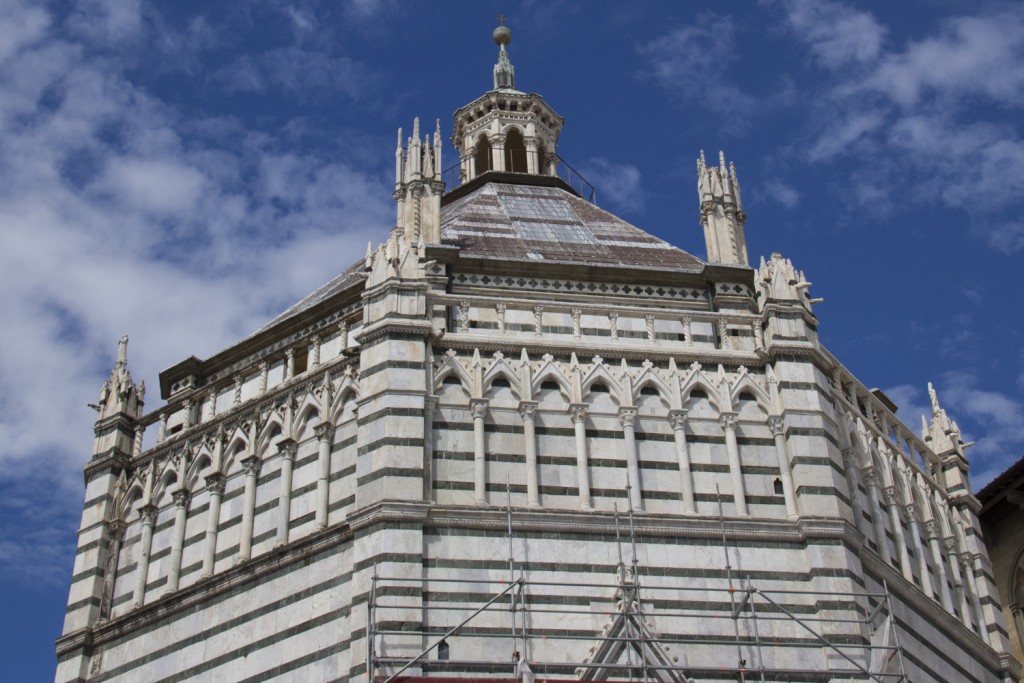 I know I will not have any problem persuading my companions to visit the Leaning Tower of Pisa as everyone wants to see this unique tower and most people want to climb it as well.  As we have an afternoon flight from Pisa it would make sense to do this on the morning of our departure.  The tower is one of four buildings in the Piazza dei Miracoli on the outskirts of Pisa including the cathedral, an impressive example of Romanesque architecture, and the baptistery – forming the most impressive collection of Romanesque architecture in Italy.

The construction of the tower began in 1173 and it stood upright for over five years but after the completion of the third floor in 1178 it began to lean and with several pauses it was finally completed in 1372 and left alone until the nineteenth century when a pathway was dug out near the base which caused it to lean even more and finally it had to be closed and anchored in 1990 and re-opened to tourists in 2001.  Climbing the tower is a strange experience – ascending on a slant.  Pre-booking is essential and visits are operated on a strict timetable but on my way up I did have time to glimpse the side of the cathedral through a window – it was leaning. 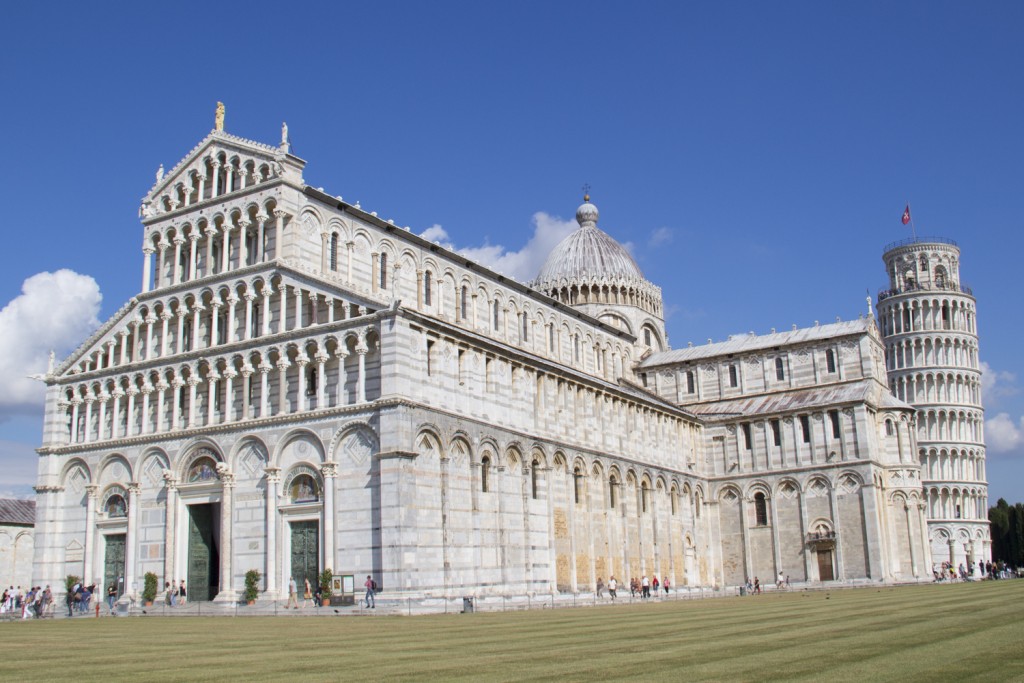 Cathedral and Leaning tower of Pisa, Tuscany in Italy

I am planning ahead already and will be checking websites for opening times and tickets – these are the links for the best and most reasonably priced websites for Florence and Pisa.  I will also be booking some dinners my favourite restaurants in Montecatini Terme are the very popular Corsaro Verde which serves delicious sea food, Il Vicolo which is housed in a beautiful building fronted by a small garden for guests who prefer to eat outside and Ristorante da Lorenzo where I had a very unusual pasta dish – paccheri (large macaroni) with curried duck which was delicious.  Happy New Year! 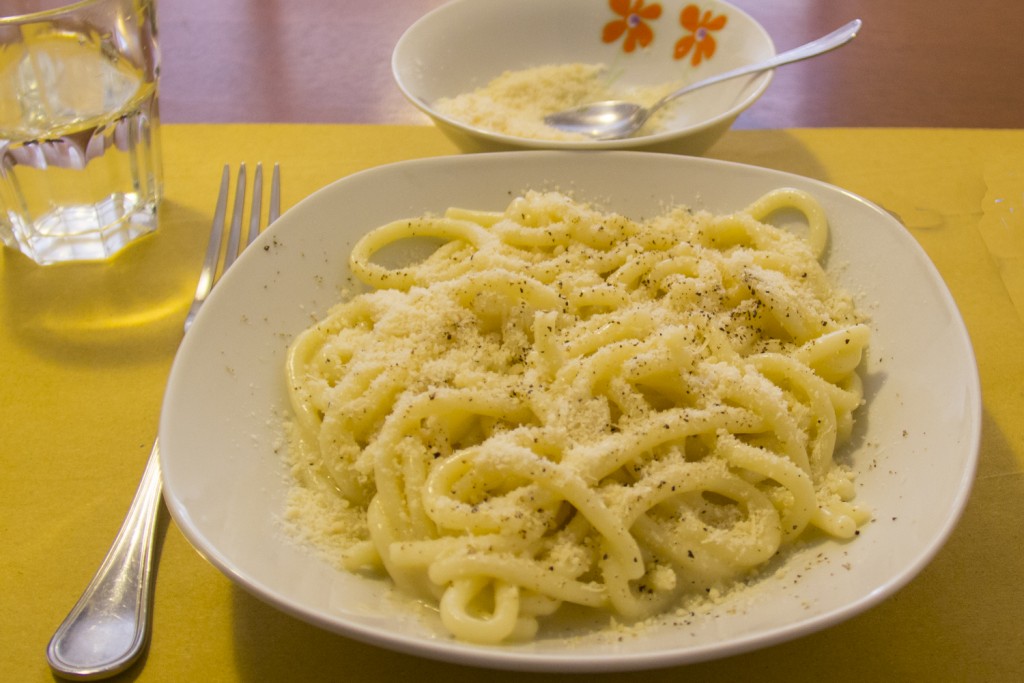 I have visited Tuscany and several times on trips organised by Solos Holidays.  We flew to Pisa with British Airways that operates flights from London Gatwick and London Heathrow.  We were based in Hotel Biondi in Montecatini Terme.  This town is ideal for exploring Tuscany as it is on the mainline between Florence and Viareggio with regular trains direct to Lucca.  This town is ideal for exploring Tuscany but there is no direct train or public bus to Siena.  Siena does have a train station but it is a long way from the town.  There are buses from Florence otherwise an organised excursion or hiring a car would be the best way to visit the town.