Kraków (Krakow) is situated on the river Visula and is the second largest and one of the oldest cities of Poland and has been established since the Stone Age. The city provides wonderful historical architecture; however some parts of the city were destroyed in World War II.

The old town, Wawel castle and Kazimeirz are the historical centres of the city which was also listed by UNESCO World Heritage Sites in 1978. There are several tourist destinations in Kraków; these include Wawel Castle, the Courtyard of Wawel, Auschwitz, Ojcow National Park & Castle, Wieliczka Salt Mine, Kosciuszko Mound, Czartoryski Museum, and the Aviation Museum etc. In this article information about the top five tourist attractions of Krakow is provided.

The Gothic Wawel Castle in Krakow was built in the 14th century by Jogaila and Jadwiga of Poland. The Castle has Royal Private Apartments, State Rooms, Royal Gardens and an Oriental Arts Exhibition, The Lost Wawel Exhibition, and Dragon’s Den etc. The most viewable features in this castle are the Armor, crown treasury and some ancient paintings by world renowned artists.

Established in the year 1956 it is one of the smallest national parks of Poland, and is named after the village of Ojców. The national park contains species of 5500 varieties; which includes more than 4500 insects and 135 varieties of birds. The Park also has Castles from the renaissance period, two Museums, and a national art collection.

The library was founded in the year 1796 by Princess Izabela Czartoryska and underwent major renovation in the year 1878. It is a National Museum of Poland which has famous masterpieces of renowned painters. Some of them are, Lady with an Ermine by Leonardo-da-Vinci, portraits of Jan Mostaert and works of Rembrandt. Some of the Museum stock was stolen during World War II, this included Raphael’s portrait of a young man (stolen by Nazis), 1470s’ The Mother of God with the child (which was stolen by Nazis), 15th century’s Saint with a book (stolen for Hitler), and 14th century’s Madonna with Child. The Raphael and 843 other important works of art still remain missing to this day. The Library consists of more than 224,000 historical documents, books, manuscripts and incunabula.

Auschwitz is synonymous with terror/horror and was a concentration and examination camp built during World War II by Nazi Germans. It was their largest base camp and operated during May 1940 to January 1945. In this camp more than 1.1 million Jews, Poles, Roma and Soviet soldiers were killed and imprisoned. Although a truly sobering experience, Auschwitz is a massively popular tourist destination in Poland, more than a million visitors come here annually.

A photo from within the Auschwitz Concentration Camp, Near Krakow, Poland.

The Wieliczka salt mine is listed as a UNESCO World Heritage Site. Built in the 13th century, it is one of the oldest salt mines and 14th oldest company in the world. There are a number of salt statues and a rock salt carved chapel which attracts more than a million visitors here annually. 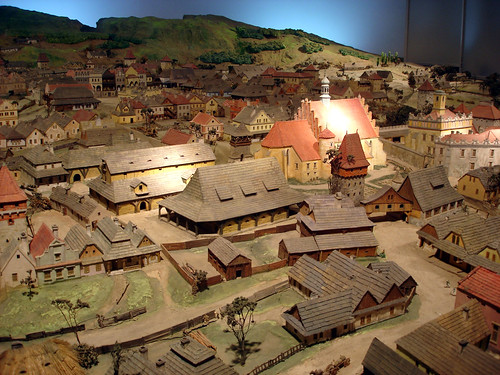 A model of the Wieliczka Salt Mine.

This article will give you some insight into 5 top attractions in Krakow. There are other attractions though such as the Aviation museum, Kosciuszko Mound, St. Mary’s Basilica, famous parks such as botanical garden, Planty park, Jordan Park, Park Krakowski, Blonia Park and the Tatra mountains which are close Krakow. Enjoy your stay in Krakow, Poland, this article can only give you a flavour, there is nothing better than visiting for yourself.