Cannes is possibly the best known film festival in the world, yet Warsaw has been holding its own glittering annual event for more than 25 years.

The Warsaw International Film Festival  has developed into a huge spectacular, showcasing films from all around the world and aiming to bring them to Festival visitors before they are featured at Cannes.

The Warsaw Film Festival originally began in 1985 as an alternative event, popular amongst students, and has slowly grown to become a truly international event.

Over the coming years the professional element of the Warsaw FilmFest – as it is also known – was steadily expanded, fusing movies, animations and short films from all over the globe to create a truly multi-cultural event.

In 2009, the hard work of the Festival organisers was rewarded when it was recognised as one of only 14 global events by the International Federation of Film Producers Associations, which also includes prestigious festivals such as not only Cannes but also Venice, Montreal, Berlin and Moscow.

The 27th Warsaw International Film Festival is due to be held between 09th to 18th October 2015 and will feature not just entries from all over the world, but also non-competitive film, premieres and even an audience award.

The awards are divided into five separate categories, with individual awards in each section, including both animated and feature films. The main prize is the Warsaw Grand Prix, for which the director wins 100,000 zlotys (equivalent to just over £19,000).

In reference to the cultural heritage of the city in which the Festival is held, there are special showing of Polish short films and there is an award for the best film of Eastern European origin.

Festival-goers have the opportunity to nominate a film – the coveted Audience Award which is handed to the most film with the highest number of votes. Past winners have included blockbusters such as Trainspotting, The Full Monty and Dead Poets Society although there have been many lesser-known films which claimed victory, including the Russian-made Euphoria and the Swedish-French collaboration, the Sound of Noise.

But the awards are only a small part of the Festival. Despite the speculation over likely winners and competition between entrants, the programme includes many more highlights.

Festival-goers with children can enjoy films specifically designed for younger audiences during the Family Cinema Weekend whilst The World Today showcases works of both fiction and documentaries which deal with and address contemporary issues.  Discoveries is a series of hidden gems plucked from the other major film festivals from around the world whilst Special Screenings brings new and as yet-unseen films to the Warsaw audience.

The critically acclaimed Trainspotting film first received an award at the Warsaw FilmFest.

One of the biggest advantages to the FilmFest is that it is set in the beautiful city of Warsaw.

Known as the Phoenix City, because of its ability to constantly arise out of the flames, Warsaw has been the victim of brutal war damage on many occasions in the past, most notably during Hitler’s assault on Europe. During this period, the whole city was savagely destroyed and razed to the ground.

Despite the widespread destruction, the whole area was painstakingly rebuilt and now offers visitors culture, history, and entertainment with plenty of green space.

Although huge parts of the city had to be built from the dust and the ashes, some historic parts of the town remained unscathed and several important sculptures, architecture and monuments escaped. Many of those that were damaged were later rebuilt so that the city did not lose its precious historical links.

Undoubtedly one of the best ways to absorb the eclectic blend which is Warsaw, the old and the new, Baroque and Neoclassical architecture nestling next to lush green modern plazas, is from up high. The city offers many vantage points which have great views but the best panoramas can be found from the 30th floor of the highest building in Poland, the Palace of Culture and Science.

Originally a gift from the Soviet Union, given by Joseph Stalin personally, for use of the people of Poland, the Palace has a sumptuous and lavish interior and houses more than 3000 rooms, including a swimming pool, cinema plus museums and libraries. It also boasts the tallest clock tower in the world which was unveiled to mark the Millennium. Visitors can be whisked up to the viewing deck (including night viewings during the summer months) where Warsaw in all its magnificence can be seen. 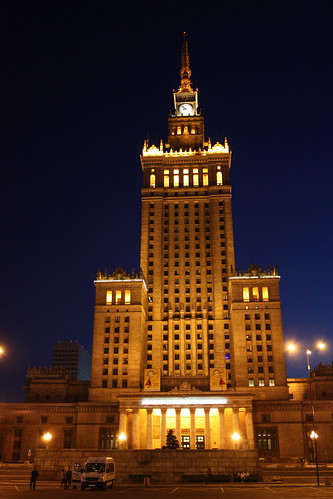 The spectacular Palace of Culture and Science lit up.

Walk in the footsteps of history

Although World War II is a very prominent part of the city’s history, and integral to the way it looks today, there is so much more to Warsaw than simply a tale of woe and destruction.

Arguably one of the greatest composers that ever lived, Chopin, is strongly associated with Warsaw, having studied and composed there for over half his life. So strong was his love for the Polish city that he expressed his desire for his heart to be buried in Warsaw. Upon his death in 1849 his wish was carried out for although his body was interred in a Parisian cemetery, his heart was brought back to Warsaw where it was buried in Holy Cross Church, where it remains to this very day.

Although Chopin was born approximately 50 km outside the city walls, it was in Warsaw that he was educated, gave his first concert and fell in love. The streets are littered with places to play homage to the great man, and the chance to walk in his steps.

The Chopin trail around the city takes in spots which are important to his fans, not just Holy Cross Church, but also Kazimierzowski Palace where he lived for 10 years, and Kazimierzowski Park, formerly the Botanical Garden, to which his family held the key.

However, Warsaw has cleverly fused modern technology with the pilgrimage to help bring Chopin’s music to life around the trail. Outside each of the places, a bench has been erected which holds a map of the trail, a description of the current location as well as a small photo-code image. And it is within this latter item that the magic lies. If the code is downloaded to a mobile phone, the user gets the option to listen to a piece of music by Chopin, free of charge, a truly thoughtful and innovative touch.

Chopin is not the only person of interest to the city; the house where Marie Curie was born lies in the New Town part of Warsaw whilst the Old Town has the infamous 15th century riverside Stone Steps down which Napoleon Bonaparte is known to have marched. 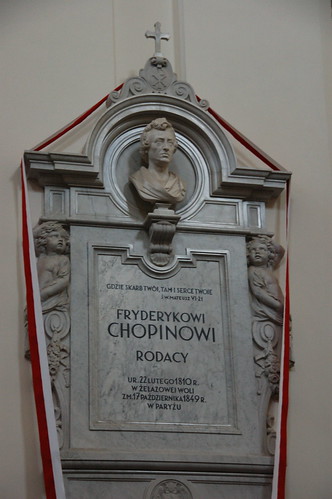 The final resting-place of Chopin’s heart in the Holy Cross Church, Warsaw.

And so much more besides!

Warsaw has become a city of delightful contradictions, with its many Palaces, Museums and Monuments entwined with more modern offerings such as the stunning Multimedia Fountain Park and the numerous art galleries and designer boutiques. One of the greenest cities in Europe, with landscaped gardens, plazas and squares, escaping for some quiet time amongst the hustle and bustle has never been easier.