Having spent some time exploring Monopoli I decided to explore further afield as Puglia  had so much to offer and a good public transport network.  I started with one of the region’s most famous towns – Alberobello.  I took the bus (it runs 3 times daily except Sundays and public holidays) and during my journey I was entranced by occasional sightings of trulli as we journeyed through the countryside.  These single storey dry stone buildings that resemble Hobbit homes have been a feature of the area since the fourteenth century.  It is thought they were an early tax evasion scheme as they could be quickly dismantled when the news arrived that the tax collectors sent by the King of Naples  – the region was once part of his kingdom – were on their way.  Another theory was that landlords could rid themselves of unwanted tenants by reducing their houses to mounds of rumble when the occuamants were out. 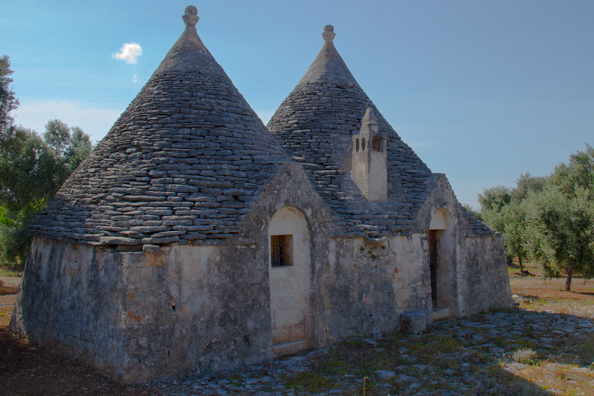 Trulli in the Puglian countryside

Once the area was freed from the domination of Naples the inhabitants continued building in this style but using mortar and hundreds of these buildings still exist today.  In Alberobello, a World Heritage site settlements of trulli intermingle with other buildings spanning the centuries.  The largest collection of trulli, Rione Monti, is best viewed from the terrace beside the Church of Santa Lucia before plunging into its narrow streets now mainly populated by shops.  Differently shaped pinnacles indicate the builder and the white symbols (not original) daubed on the tiles are a mixture of pagan, mystical and Christian.  At the top of the hill is the trullo church of Sant’Antonio is a lovely, simple place of worship that was built and opened to the public in 1927. 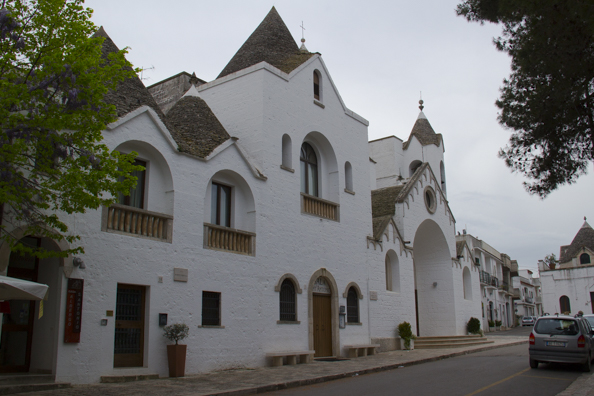 Aia Piccola is a smaller settlement.  Aia means farm yard and originally trulli surrounded a large space used for threshing corn.  Here you will find one of very few two-story trulli – Trullo Sovrano which is now a museum.  The second floor in this trullo is accessed by a flight of stairs whereas access to the attic in smaller trulli is via a ladder.  This property contains a collection of old farming implements, household items and notes on the walls describing life in a trullo life in times gone by.  On the outskirts of this area is the Casa Pezzolla now the Museum of the Territory (closed on Mondays).  Between these two areas is the Basilica of SS Cosma and Damiano built in 1882 on the site of the original church devoted to the cult of the SS Medici patron saints which it still honours today and houses an interesting painting of the two saints it honours.  Enough sightseeing – time for some traditional food, away from the tourist area and Ristorante Trullo dei Sapori http://www.ristorantetrullodeisapori.it/ was the perfect choice.  It was bustling with Italians and offers local specialities such as the pasta dish strozzapreti all norcina in salsa rosè (sausage pieces and mushrooms in a rosè sauce). 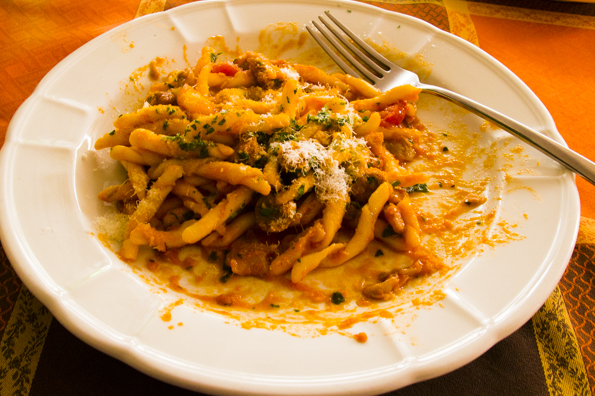 The opulence of Baroque buildings in in Lecce is a complete contrast to Alberobello and displays an unusual sophistication for the region as I discovered the following day when I journeyed there by train.  Indeed, there is so much to see I did not know where to start so I just walked from the station towards the centre of the old town with frequent diversions to enjoy the architecture and in particular the buildings of its university, Università del Salento.  I even gate-crashed a conference in one of them to explore its courtyard that featured some beautiful frescoes.  Eventually my wanderings brought me to the side entrance of the Cattedrale di Santa Maria Assunta  and my timing was perfect – as I went in everyone else was going out as the building was about to close.  After strolling through the elegant interior I emerged into the Piazza del Duomo  that was now eerily deserted.  This large open space in a very built up area was designed as a place of refuge for the town’s citizens during threats of invasion as they could retreat there and block the narrow entrance.  I sat on the steps of the cathedral from where I was able to appreciate the beauty of its immediate neighbours, the 15th-century Palazzo Vescovile and the 18th-century Seminario. 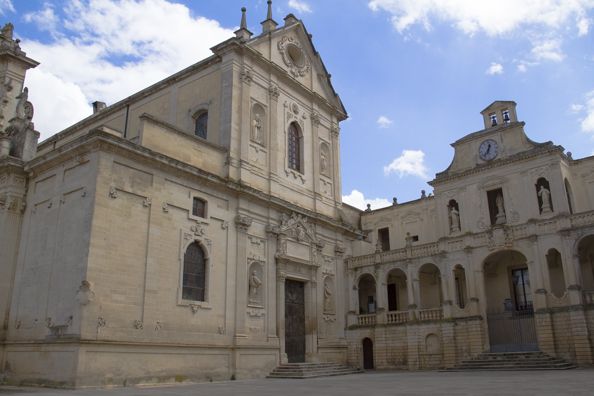 I followed the signs to the Basilica of Santa Croce one of the most important churches in Lecce but instead ended up in Piazza Sant’Oronzo the centre of the modern city.   This piazza is named after Sant’Oronzo who gazed down at me from the lofty heights of his personal column, a gift from the nearby city of Brindisi one of several cities in Puglia that worship Sant’Oronzo as their saviour from plague and famine. He was also the first Christian bishop and was based in Lecce before he becoming their patron saint. 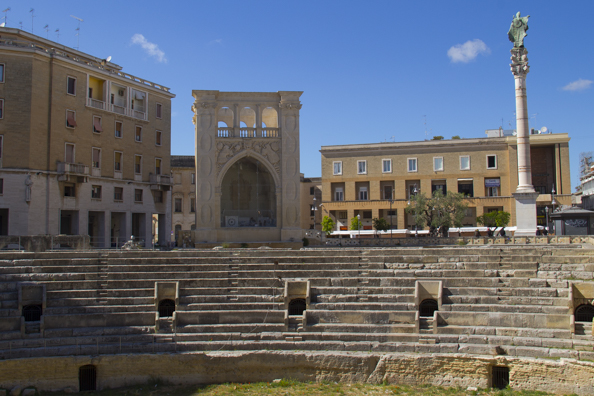 I spent some time in this square enjoying its attractions that included the Roman Amphitheatre that was built in the second century and could seat more than 25,000 people.  The theatre is still used today for religious and cultural events in the city.  And the Chiesetta di San Marco  which was built by the Venetian community in 1543.  Next door to this church is Palazzo il Sedile or Il Sedile, the seat of Lecce  a beautifully restored cubic building that was built as a private residence before being used as the Town Hall and now houses the Tourist Information office. 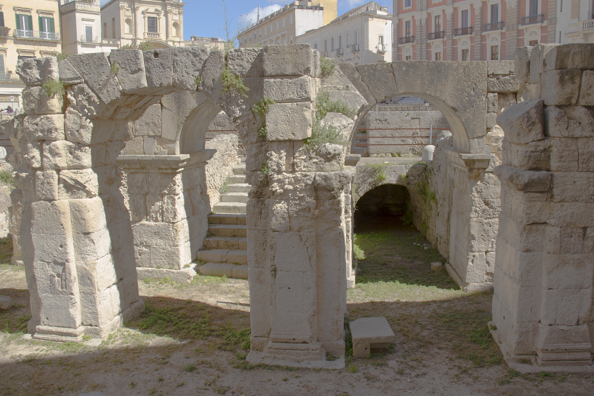 Remains of the Roman Amphitheatre in Piazza San’Oronzo in Lecce, Puglia, Italy

When I eventually found the Baslilica of Santa Croce it was in the throes of extensive restoration but I could still appreciate the magnificence of its façade, the work of Lecce’s famous architect and sculptor Giuseppe Zimbalo one of the leaders of the Baroque movement in the city.  This movement began in a period of peace for the city after decades of instability mostly involving the Ottoman Empire with the advent of a group of artists and benefactors who during a period of one hundred years transformed Lecce from a garrison town to its current Baroque splendour.  The transition was helped by the availability of the local, soft, golden limestone known as the Lecce Stone that was ideal for the carvings and sculptures of the playful mixing of mythological creatures, floral patterns, and flamboyant motifs that are typical of the unique Baroque style developed in Lecce – no doubt influenced by the Spanish who ruled the region during that period.  Sadly, the most obvious evidence of Spanish influence on the town, Castello di Carlo V – the castle built by the King of Spain to fortify the town – so I ended my visit in the Villa Comunale di Lecce which we would call a public park.  This was an oasis of calm after the bustle of the city and I sank onto one of benches in the shade of the trees to enjoy the essence of water in the air drifting from the fountain before exploring further.  As I strolled around the park I came across a small ornamental temple and several busts of famous Italians, most of them by the sculptor Eugenio Maccagnani. 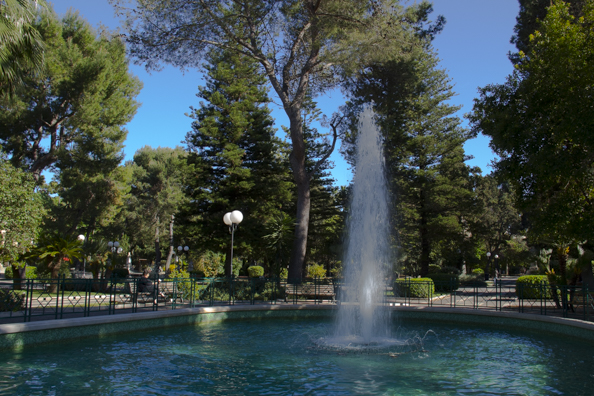 Ostuni is also accessible by train but the town is five kilometres from its train station but a local bus meets each train and takes visitors directly to the Piazza della Libertà  by the historic centre.  This square is dominated by the Palazzo Municipale originally a Franciscan convent and now the Town Hall and watched over by the Baroque style Column of Sant’ Oronzo column, built in 1771 to celebrate the deliverance of the town from plague and famine.  I took the exit from this square next to the Church of Saint Francis of Assisi  pausing to admire the beautiful stained glass windows inside and followed the road to the top of the hill and Piazza Trincera home to the cathedral and a lovely arched loggia linking the Palazzo Vescovile to the Palazzo del Seminario which now houses the library.  From this square I followed a narrow alley down to the Viale Oronzo Quaranta a wide promenade encircling the old city walls perched above the surrounding countryside. 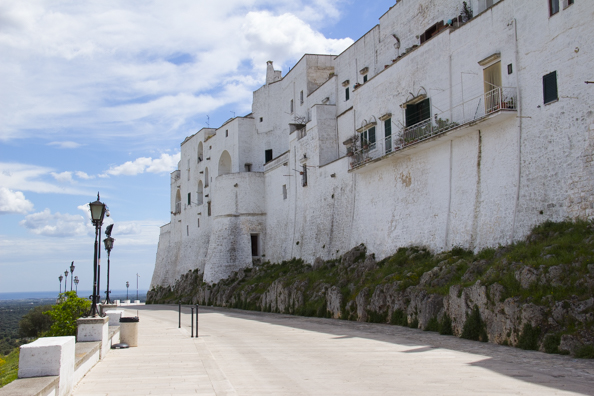 Viale Oronzo Quaranta that circles the old town of Ostuni, in Puglia, Italy

The charming town of Polignano a Mare is easily accessible by train.  I visited the town on a Thursday when the weekly market – beyond the covered fruit and vegetable market – lines the main road as far as the eye can see.  Beyond this market the road continues to the archaeological site of Santa Barbara thought to be the remains of an ancient Greek town.  From these ruins it is a very pleasant walk back into town along the Lungomare Cristofero Colombo which meanders along the rugged coastline punctuated by coves and caves to the old town – white buildings perched atop cliffs plunging into the glittering sea below.  Its narrow streets converge on its largest square, Piazza Vittorio Emanuele, which is dominated by its most important church, Chiesa Matrice dedicated to Santa Maria Assunta, well-known for its life-size nativity inside.  When I left the church I followed the sign to the Ristorante La Balcone and found a makeshift restaurant in a small courtyard with great sea views and scrumptious crispy frittura mista di pesce (deep fried fish including squid and octopus). 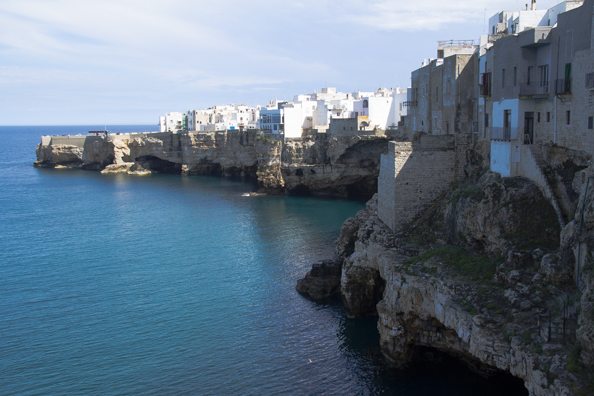 The old town of Polignano a Mare Puglia, Italy

I emerged from the old town above the beach and beyond that I found an impressive bronze statue of its most famous son, Domenico Modugno  who dominated the music scene from the fifties to the early nineties and also wrote the famous song Volare.  A good note on which to finish my visit and exit the old town through one of the orginal city gates, Porta Vecchia, cross the wide open space adorned with olive trees that is Piazza G Garibaldi on the way back to the station – maybe pausing in the square to enjoy an ice cream for which the town is famous.

Puglia is very easy to get to from the UK as British Airways operates regular flights from London Gatwick to Bari which is well-connected to the railway system of the region including direct trains to Monopoli.   There are no trains from Monopoli to Puglia’s most famous town Alberobello but there is a daily bus service except Sundays and public holidays.  Tourist Information offices will provide current timetables (and an explanation).

And the best time to visit.  Definitely in the spring – April to May when the countryside is a riot of colourful wild flowers, the weather is cooler and the Italians are not yet on holiday.