Croatia is fringed by a long, naturally beautiful coastline.  In particular, the region of Dalmatia is blessed with dramatic seascapes studded with islands.  The Makarska Riviera in this region winds along the coast for sixty kilometres between the villages of Brela and Gradac.  This Riviera is famous for its crystal clear waters and sandy beaches, a rarity in Croatia.  Its main town is Makarska,  watched over by the imposing Mount Biokovo.  Both offer interesting walks for visitors. 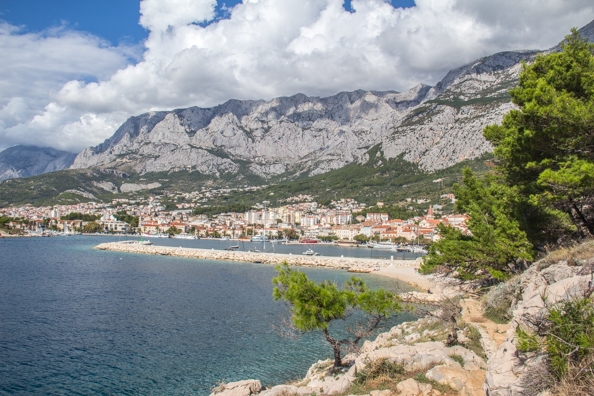 Makarska on the Makarska Riviera

At one end of the harbour of Makarska is the historic Peninsula of Saint Peter.  This peninsula is instantly recognised by the iconic statue of Saint Peter looking back towards the town.  There are several paths on this rocky outcrop.  They either thread their way through the pine forest that clothes it or follow its jagged coastline.  The coastal path goes past the lighthouse of Saint Peter and continues to the statue of Saint Peter.  On the edge of the path close to this statue are some railings covered in padlocks placed there by lovers’ as an expression of their intention to remain together for ever.  According to legend if a married couple should want a divorce they should first unlock the padlock.  This would involve finding the key that was tossed into the sea below.

Turning inland the visitor will come across the little church of Saint Peter.  This simple church was built in the fifteenth century on the site of a sixth century church.  Beyond the church is an old defensive tower.  In the past this area struggled to protect itself from invasions by Barbary Pirates.  The town was also continually under threat from the Ottoman Empire and the Venetian Republic both determined to conquer this strategic position.  The Venetians were successful and some of their beautiful Baroque buildings can still be seen today.  Beyond the large market at the neck of this peninsula is the main beach of Makarska.  This large, pebble beach stretches around a large bay against a dramatic back cloth of Mount Biokovo.  Beyond the beach is an easy walk to the next village, Krvavica.  Off-shore are two islands, Brac and Hvar both easily accessible on the local ferry for visitors who wish to explore further. 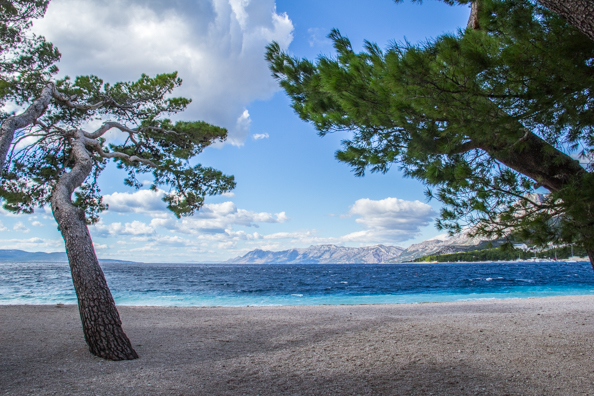 The Beach at Makarska in Croatia

Cape Osejava on the opposite side of the harbour offers a linear walk through scented pine trees above a rocky coastline.  There are lovely views of the town from the end of this cape.  Tantalizing glimpses of the sparkling sea below and the peace of the shaded wood make this a very relaxing walk.  It stretches for eight kilometres to the pretty town of Tucepi and maybe a swim from its long gravel beach?  For those who do not wish to walk back to Makarska there is a local bus service or a ferry (in season) 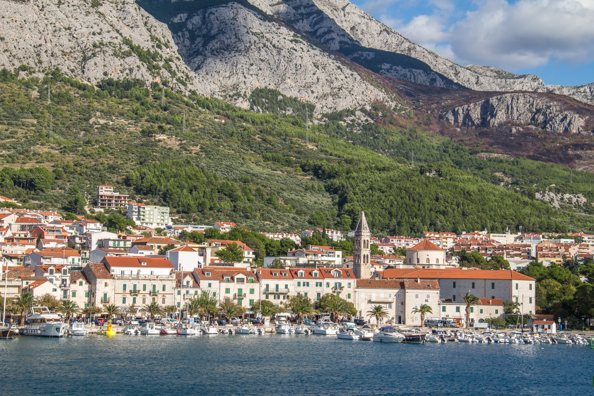 Makarska on the Makarska Riviera in Dalmatia, Croata

Makarska has a long promenade skirting the old town.  Venturing up one of the narrow alleys leading off it will take the visitor into the historic town http://makarska-info.hr/en/152/history.  Here the visitor can find several interesting old buildings.  The Baroque cathedral of Saint Mark dominates Kačić Square, the main square of the town.  A statue of the Dalmatian poet Andrija Kačić Miošić, after whom the square was named presides over the many cultural events that take place here. 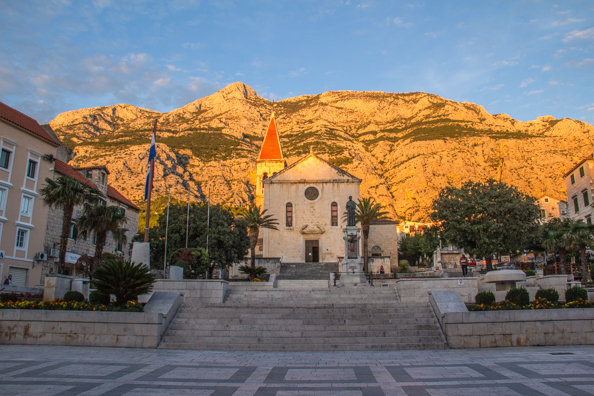 The Baroque church of Saint Mark in Kačić Square in Makarska in Dalmatia, Croatia

Beyond this square is the Franciscan monastery at one end of the town.  Today the old monastery houses the Malacological Museum, more commonly known as the Shell Museum, and the Institute of Sea and Plants.   Back on the sea front, housed in the baroque Palazzo Tonoli, is the Town Museum.  An ideal starting point for those who wish to learn more about the history of the town 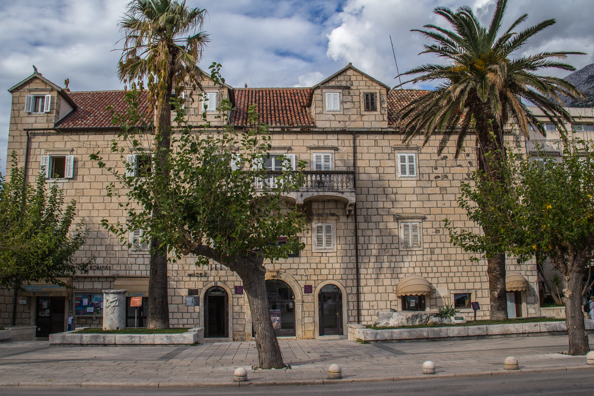 Town Museum in the Palazzo Tonoli in Markarska in Croatia

Peaks and Paths Beyond Makarska

Mount Biokovo above Makarska is the main attraction in the park of the same name.  Its dramatic peaks, composed of limestone, have been fashioned by nature into a series of peaks, plains and valleys.  These offer a variety of paths for walkers of all standards.  One of the most popular peaks is the peak of Sveti Jure or Saint George.  At 1762 metres above sea level it is the highest peak on Biokovo and the second highest peak in Croatia. More experienced walkers can follow the path and road up to top.  Others may prefer to wind their way up there in a small bus to visit the church of  Ckrkva Sveti Jure perched up there. 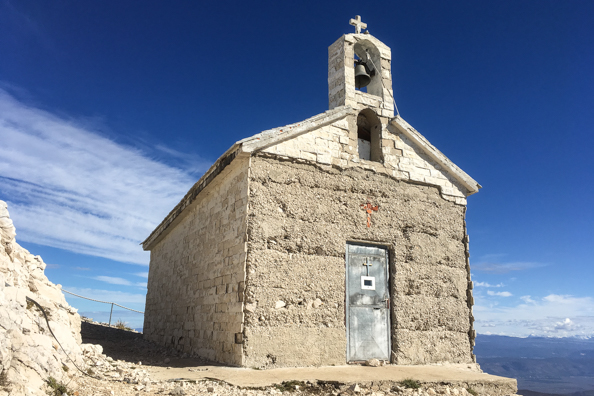 There are various options for easier walks on the way down.  One features the peak of Vosac as there is a short walk (twenty minutes) to the top of this peak from a parking area.  At the top the visitor can enjoy glorious views of Makarska below and a picnic. 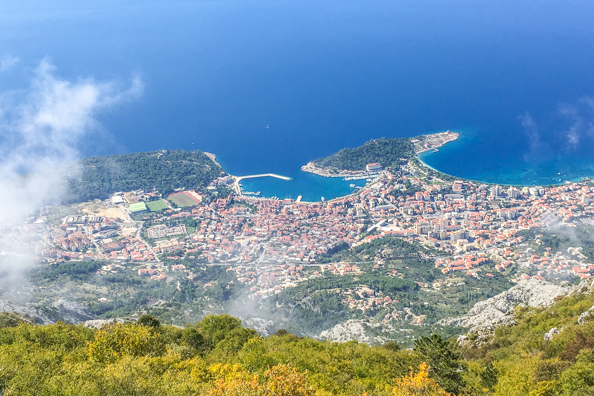 Other paths include an easy one from the village of Bast on the lower slopes of Mount Biokovo to the deserted village of Makar.  This village was badly damaged by an earthquake but it is still possible to see some of the old Dalmatian houses.  After Makar the path descends to Veliko Brdo, a suburb of Makarska, and the possibility of lunch in the local restaurant.  There is also a historical path from Upper Brela with points of interest along the way described by information boards.  This walk ends on the cliff top in an area known as Nevista which features the legendary Bride’s Rock.  Napoleon’s Road or the French Road can be incorporated in this trail.  Napoleon had started building this road to move his troops along the coast but it was never completed. 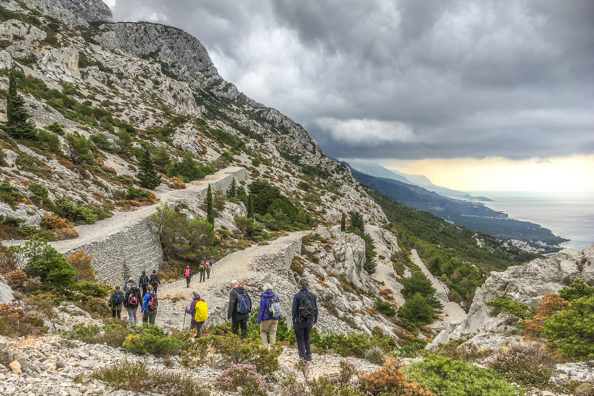 A complete contrast is the walk from the village of Kostanje initially passing through agricultural land.  The path goes through the valley of the River Cetina sometimes running alongside this river.   Walkers may be lucky enough to eat a simple lunch at a very local village restaurant on the way – although it is very popular with local hunters.  As a final treat boats can be booked to transport walkers into the historic town of Omis on the River Cetina – a lovely way to arrive in this interesting seaside town.  During the Middle Ages Omis was famous for its pirates who ruled the local seas from the fortresses above the river mouth. 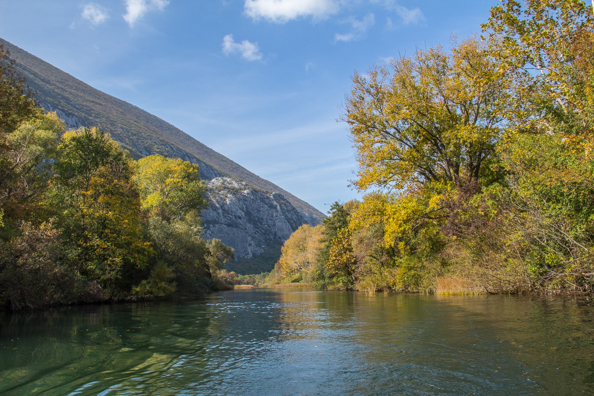 Cruising on the Cetina River towards Omis in Croatia