The pinnacle of urban art is undoubtedly found in graffiti – the art form is now considered as carrying bonafide cultural value, with talented graffiti artists colouring the world with unique works that you won’t find in your average art gallery.

If you’re a budding graffiti artist and looking for a little inspiration or simply an admirer of street art, then the following cities are not to be missed. Be prepared to lift your jaw off the floor.

Many graffiti experts see the Argentinian capital as the mecca of street art. You won’t be able to turn a corner without seeing yet another masterpiece. The city lives and breathes an urban rhythm you won’t find anywhere else.

The reason Buenos Aires has such impressive graffiti on show is the sheer freedom artists are given. Police turn a blind eye to it, while the public generally welcomes the artworks. It makes for a setting where artists can paint without interruption, letting loose their artistic talents without fear.

For those of you who like a little guidance on what’s on offer, why not take one of the many specialists walking tours? One such tour company is graffitimundo, an independent non-profit organisation that takes you off the beaten track to give you the full story of Buenos Aires and its addiction to graffiti.

Alternatively, check out the bars and hostels that have been made famous for their graffiti interiors. The Art Factory hostel and the Post Street Bar come highly recommended, though there are many other such establishments dotted around the city.

Argentinian Artists You Need to Know:

Ever (aka Nicolás Romero) – One of graffitimundo’s premiere artists, Ever has been a mainstay of the Argentinian urban art scene since the 1990s.

Pum Pum – She’s as mysterious as she is talented. Recently, she was featured on BBC Mundo as one of the country’s up-and-coming street artists. The home of arguably the most famous urban artist on the planet, Banksy has driven an immense growth of graffiti in the nation’s capital city. London now boasts a thriving urban art scene and some of the top artists now call The Big Smoke home.

Despite anti-graffiti laws still being in full force, urban art has well and truly established itself and doesn’t look to be going away anytime soon. Legitimate organisations such as the Tate Modern have even welcomed the scene, with a celebrated exhibition in 2008 displaying the talents of six powerhouse graffiti artists.

If you’re looking for Banksy’s art in particular, then we recommend you make your way to Canary Warf. There you’ll find the celebrated stencil of the girl falling with a shopping cart from 2011. Otherwise, don’t miss out on Camden, Shoreditch or London’s East End – you’ll find a range of graffiti art from various names known on the London scene.

British Artists You Need to Know:

Banksy – we can’t exactly leave out the biggest name, can we?

Cartrain – focusing on both stencil and collage work, Cartrain has built up quite a following and has been featured in some of the world’s top galleries. Even those who are brand new to graffiti art will have heard of the famous West Hollywood Library on San Vicente Blvd. It’s one of the most impressive celebrations of urban art, with the building’s external displays having been commissioned to Kenny Sharf, Retna and Shepard Fairey. Each with their own unique artistic vibe, the murals on the library are definitely worth a look.

And that’s just the start of what Los Angeles has to offer. The city has an active urban art community, so you won’t have any trouble finding a wide array of styles and inspirations. Pay particular attention to graffiti under the many overpasses – they’re home to some of the most visually enthralling murals you’ll see anywhere.

American Artists You Need to Know:

Shepard Fairey – One of LA’s biggest names on the urban art scene, period.

Mr Brainwash – Also known as Thierry Guetta, this Paris-born artist holds plenty of clout, with big names such as Madonna vying for his services. Berlin has a hip and trendy vibe that’s fully deserved, with street art packing a strong punch that can be felt throughout the city. What was once an empty and grey artistic landscape has now been filled with colour brought to life by a pool of fantastic talent – the air of communism is slowly evaporating from East Berlin.

For the most vibrant urban feel, check out Kruezberg or Prezlauerberg. They’re packed with artists of all sorts and graffiti art plays a major role in the aesthetic value of the districts. The inspiration drawn from the fall of the divide between East and West is still tangible, from the streets to the squares to the interiors of the many cafes.

German Artists You Need to Know:

DAIM – Has the reputation of being one of the top graffiti artists in the world, and has a particular penchant for 3D-style works.

Boris Hoppek – Now based in Barcelona, Hoppek has expanded from graffiti to working with photography, video, and installation art. 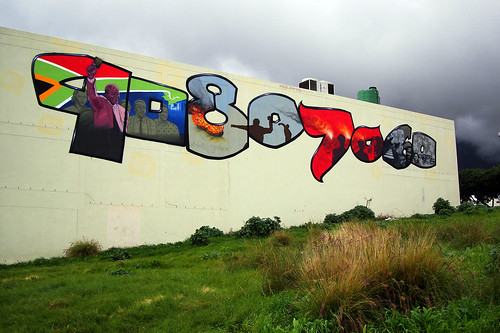 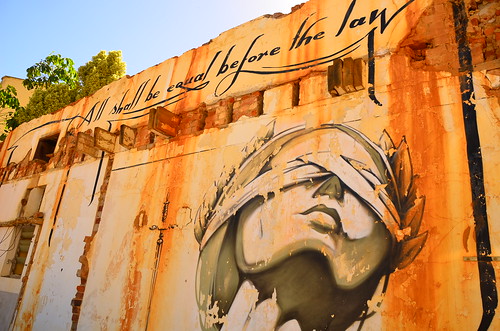 A city with a complex and layered history, Cape Town’s graffiti will connect on both an artistic and human level. The city’s graffiti exudes both what makes South Africa such an amazing country and how its people have had to suffer (and still do).

District Six is the neighbourhood that urban art aficionados must see – its art is wide ranging and tackles various topics, such as human rights, significant figures in the country’s history (e.g. Nelson Mandela), issues of race, as well as simple everyday life events that tell a story in their own right.

Cape Town’s graffiti retains a strong link to Apartheid, commemorating the forward movements made in recent decades, but also highlighting the ever-present issues that remain. You’ll find it difficult not to be moved by some of what you’ll see.

Falko Starr – Based in Cape Town, Falko’s art is filled with social and political commentary.

Faith47 – Her work is built on existential questions, exploring topics that are alien to many other graffiti artists.