Split is a great city to spend a few days in for anyone looking for history, food and drink, and top beaches. Thanks to it’s location, it’s an ideal base camp to explore the Dalmatian Coast from, with convenient boat connections from Split harbour taking you to the picturesque Croatian islands. Read on to discover five things you should do in Split’s old town while you’re there.

Visit the Palace of Diocletian 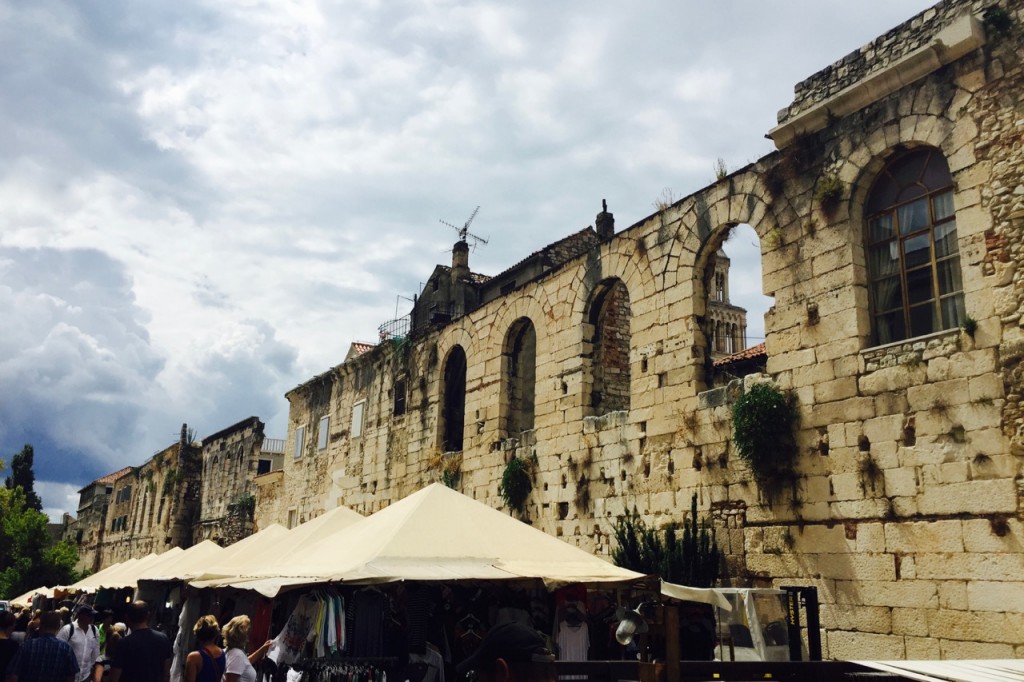 The Palace of Diocletian is one of the most important parts of Split, where you’ll spend most of your time. However, unless you read on, you may not realise you’re in a palace at all!

That’s because the Roman palace is part of the old town itself. Inside the palace’s ancient walls, you’ll find a labyrinth of restaurants, bars, shops and more. While there’s no museum, you’ll find the impressive bell tower of the Cathedral of Saint Domnius, the peristyle, or main square, and the old clocktower.

In fact, the Palace of Diocletian is the most complete remains of a Roman palace in the world, and was originally constructed in the fourth century as a retirement home slash military garrison for Emperor Diocletian, who was originally from the area.

When you visit, spend some time exploring inside the palace walls – you’re sure to be impressed about how well preserved this ancient part of the city really is! 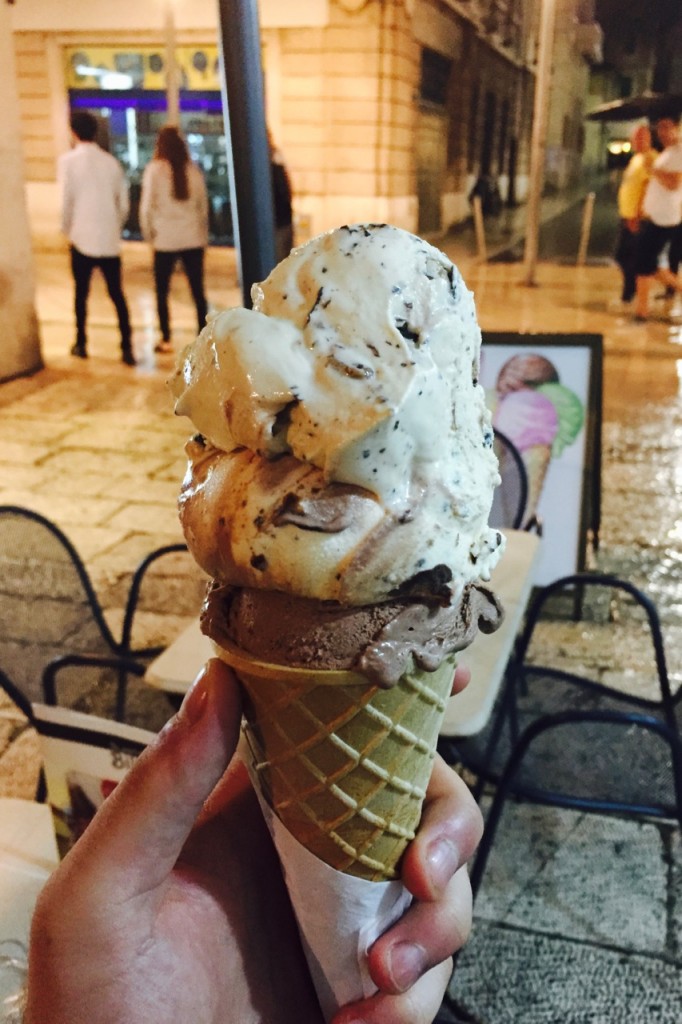 Split Riva is the main promenade in the old town amongst the most beautiful and famous part of the town. Here, you’ll find a number of restaurants with alfresco dining, plus bars to grab a drink while looking out onto the ocean.

Split Riva is the perfect place to spend time if you’ve got a sweet tooth, as the city is known for it’s ice cream. The promenade is saturated with ice cream shops and stands, each with a huge selection of different flavours. The only acceptable choice is to go for a triple scoop cone to try as many flavours as you can in one sitting – then return for another the following day.

Take a boat trip to Hvar 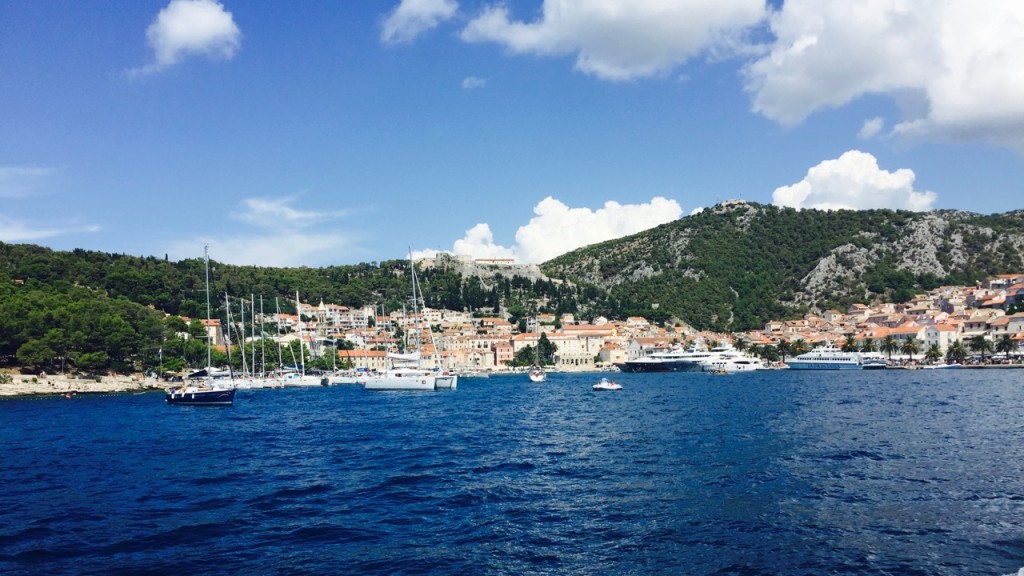 Several boat tours go to Hvar each day, however we went went with Summer Blues, who operate a huge catamaran, taking you to Hvar as well as two swimming stops amongst beautiful surroundings along the way, plus free food and drink along the way!

With around two hours stop in Hvar, there’s plenty of time to check out the main sights, including the town square, and if you don’t mind climbing a steep hill, there’s the fortress at the top of the hill, offering incredible views down into the bay.

Check out the Nightlife 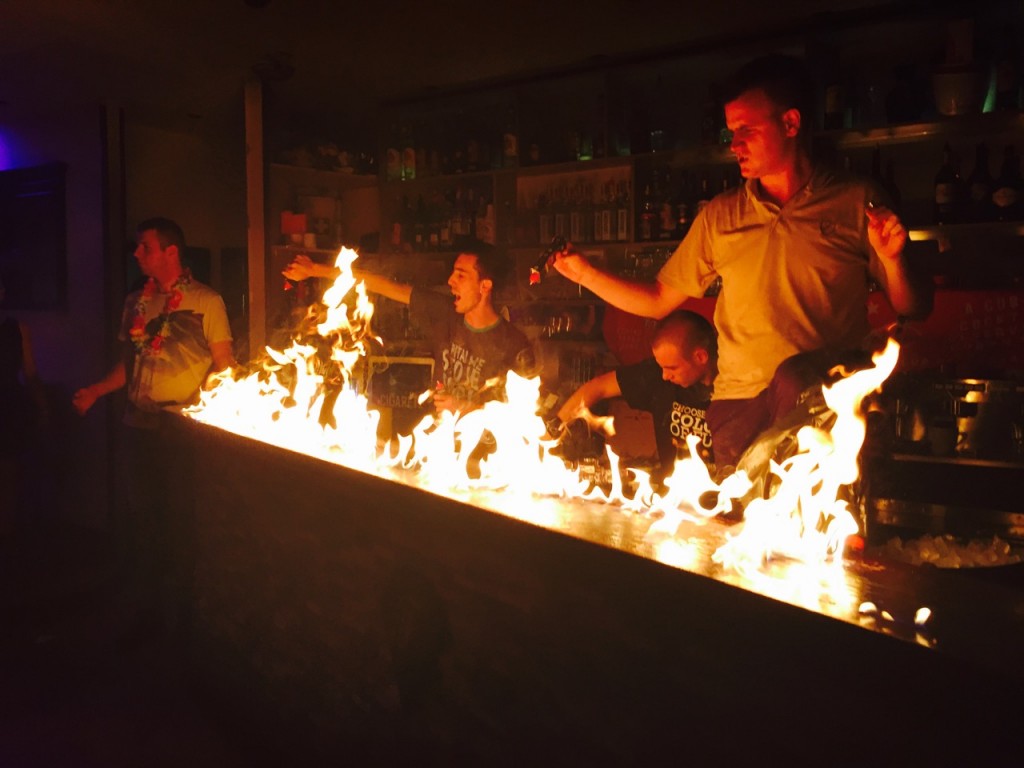 Split’s old town features numerous bars to grab a beer or a cocktail. Restaurants and bars at Split Riva can be quite expensive, so try going for a wander further into the town among the maze of old buildings and remnants of Diocletian’s palace. You’ll find numerous places for a drink down hidden alleys, which open up into larger courtyards and squares. There’s plenty of secluded drinking spots to discover!

If you’re travelling solo, try Charlie’s Bar at Kruziceva 5. This watering hole was founded by a group of Aussie backpackers who didn’t want to leave, and is packed with travellers most nights. Though it’s rather small, there’s always a great atmosphere, partly down to the fact that their happy “hour” lasts a total of 5 hours!

Solo travellers looking to meet other like-minded people should also check out the pub crawls that operate in Split: the Split Tower Pub Crawl and Ziggy Star Pub Crawl. Both offer 90 minute power hours of free drinks, before heading to a number of bars and clubs around the city. And yes, there seems to be a trend of “hours” lasting much longer thank 60 minutes here, a reflection of the super relaxed atmosphere!

Catch some rays on the beach 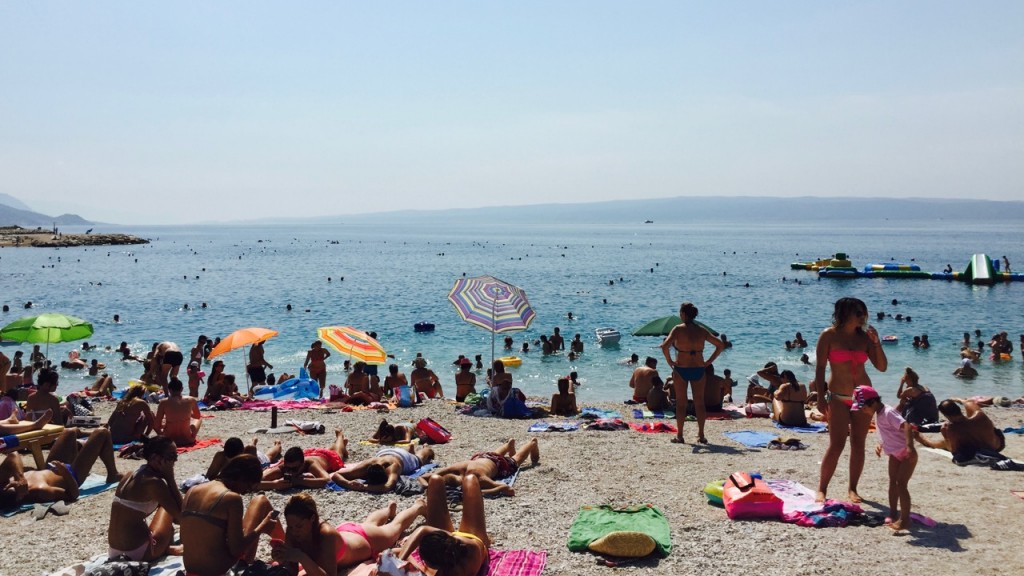 The one complaint about beaches I hear time and time again from friends is that sand gets everywhere! In that case, Split has the perfect beaches for people who hate sand. Why? It’s all down to Split having a range of quality non-sandy beaches.

Only Bačvice beach has real sand, which can get very crowded in peak season. However, go down the coast a bit further, and you’ll find the sand turns into fine gravel, which may hurt your feet, (bring your flop flops!) but mean you won’t get sand everywhere!

Some of the best beaches in southern Split include Znjan, Firule and Ovcice, which are mainly frequented by the locals. Each have beach clubs serving a range of beers and cocktails, making them a great place to chill out after going for a dip.

While you’re there, keep an eye out for the locals playing picigin, particularly on Bačvice beach, which is a unique Dalmatian sport that involves a lot of acrobatic leaps and jumps as players try to prevent a small ball from hitting the water.

What’s your favourite thing to do in Split? What would you add to this list? Let us know in the comments below!

Thinking of Island hopping in Croatia? See 5 of the best islands in Croatia

Author bio: Seb
Digital marketer by day, travel blogger by night, Seb has spent much of his youth travelling Europe. He blogs about his adventures as well as tips and advice for anyone looking to do the same, at The Traveloid