As the nights draw in and the temperature drops and most people are concentrating on the forthcoming festivities it is the ideal time to plan your next holiday.  A perfect destination in the spring is Puglia, a region at the southern-most point of Italy and still relatively undiscovered by tourists.  This region is populated with delightful resorts and interesting towns but my favourite has to be Monopolí with its fascinating old town and beautiful natural coastline. 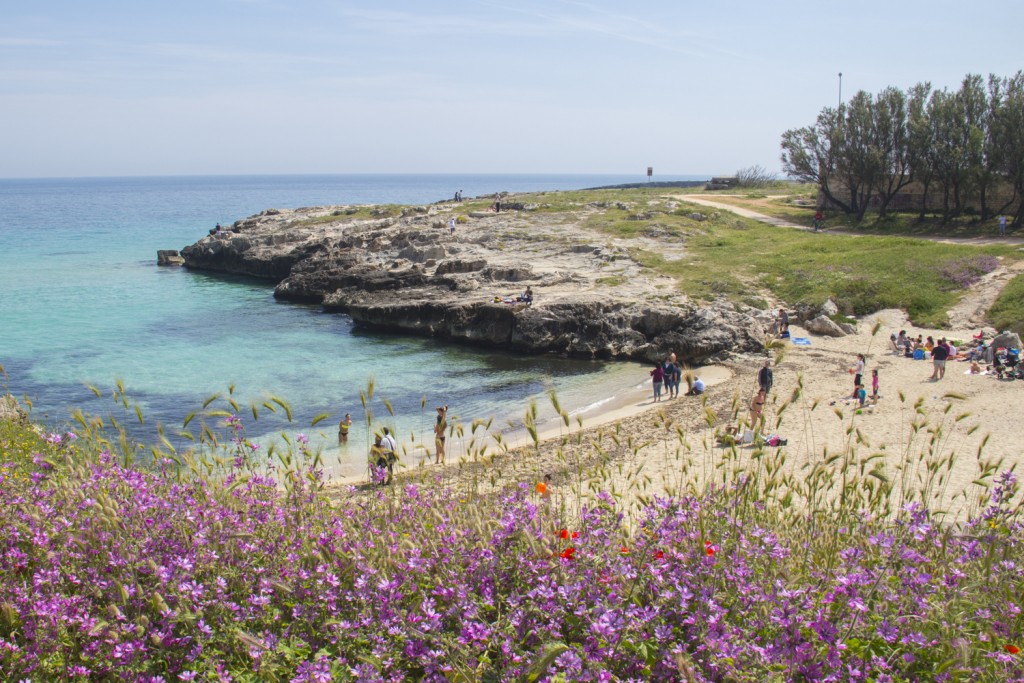 The coastline near Monopoli in Puglia, Italy

Strategically Puglia was important throughout Ancient history as the gateway to Greece and the Orient from Italy and also a first port of call for people arriving in Italy. Many civilisations have controlled this area including the Venetian Republic and have left their mark. But the area has not always been subjugated and has experienced periods of prosperity. During the thirteenth century it was one of the most important and wealthy regions in Italy as evidenced by an abundance of architectural treasures. Stunning medieval towns surrounded by beautiful countryside where vines and olive trees flourish makes this area an attractive and interesting holiday destination. 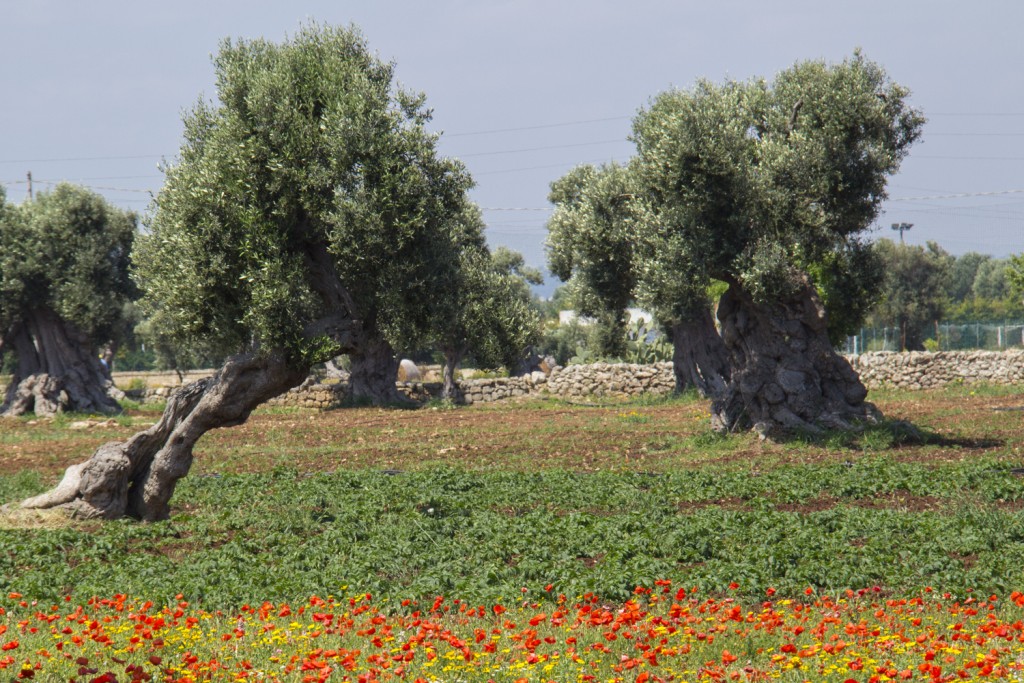 Wild flowers and olive trees of Puglia in Italy

Start your day in Monopoli with a cappuccino and cornetto (croissant) at the popular Premiato Caffè Venezia in the main square of the old town of Monopoli, Piazza Garibaldi. Feel free to dip your croissant in your coffee, Italian style, as you watch the old town come to life around you. It is a slow, leisurely awakening in keeping with the pace of life here. 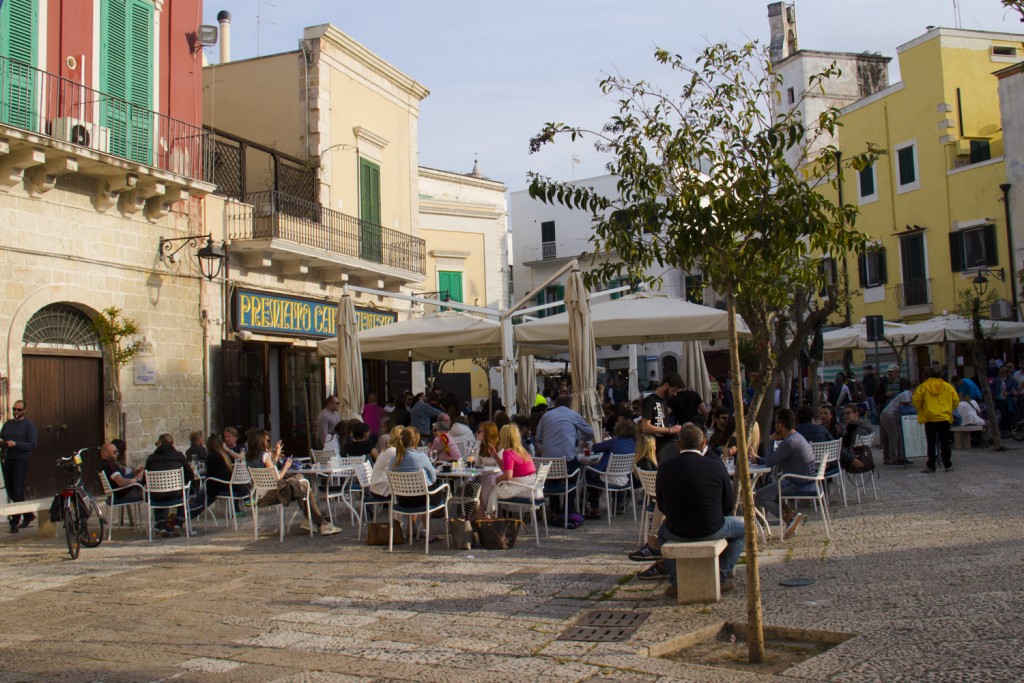 Exit the piazza through the archway that leads into the old fishing port where little blue boats bob gently on the water as their owners display their catch on the surrounding flagstones ready to bargain with the locals. Make your way around the harbour to the Charles V castle that stretches along one side of the little harbour. This defensive castle was completed in 1525 and was originally separated from the medieval city but it was restored and enlarged during the seventeenth century. Early in the nineteenth century it was converted into a prison and was used as such until 1969. Now it is open to the public and has become a venue for art exhibitions and cultural events. The castle is worth a visit to enjoy the panoramic view from its roof and watch the last of the fishing boats bouncing over the waves to the shelter of the harbour. The local boat club will be out training on the water below as this small town is famous for its rowing prowess. 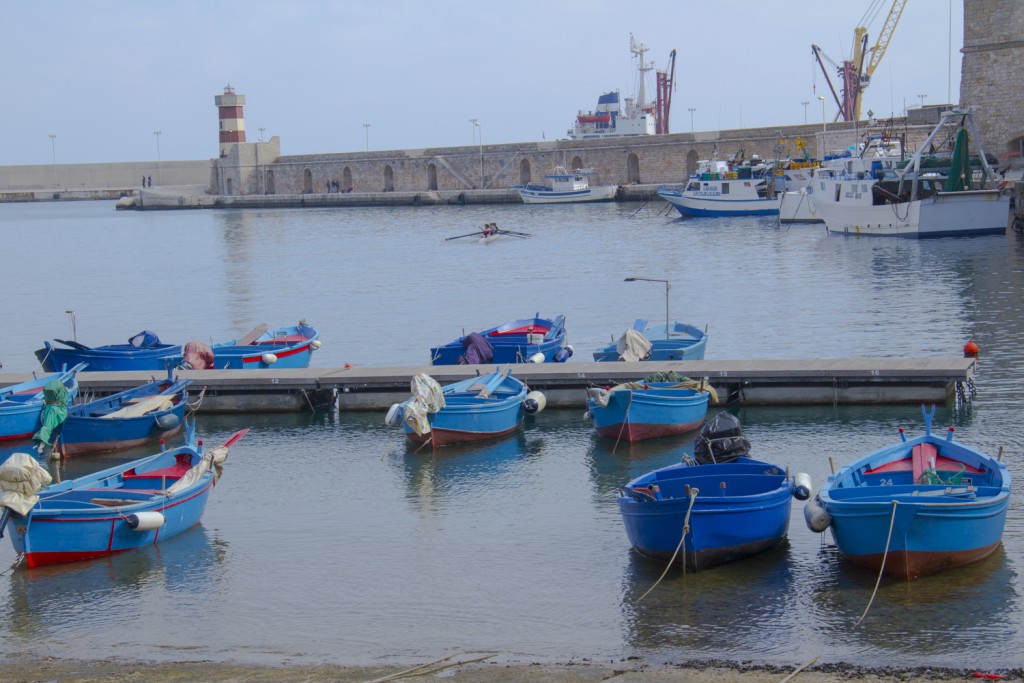 The castle is at the start of a wide promenade or lungomare that stretches along the sea front behind the old defensive sea wall. As you stroll along enjoying the cool sea breeze take time to climb onto the canon-mounted bastion of Santa Maria below which local young fishermen cast their lines into the swirling waters around the rocks. Ahead the promenade stretches far beyond the town following the contours of its rugged coast that is dotted with pretty coves. To your right (after the Tourist Information centre) you will be enchanted by the tiny Medieval Church of S. Vito that originally belonged to the family Del Lago whose coat of arms are displayed behind the altar. It is still in private ownership and unlikely to be open but visits can be arranged. 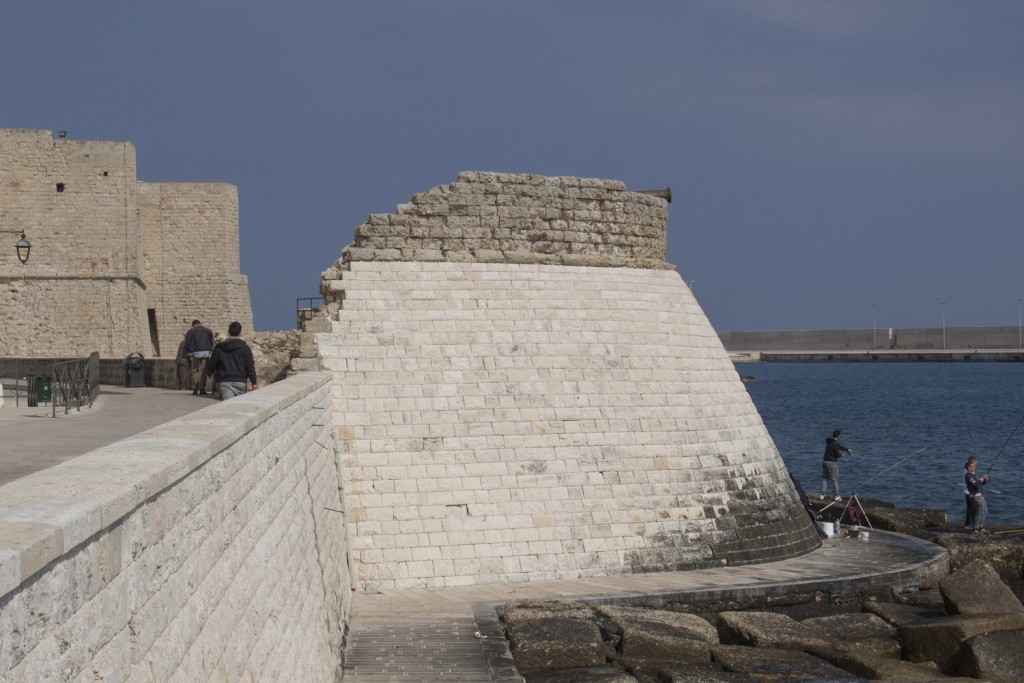 Turn into the narrow streets historic centre where you may be tempted to follow the tourist itinerary signs but sightseeing is delightfully random here as the signs often just peter out or point the visitor back in the direction they have just come from! Every narrow street seems to lead to a church or old monastery building, a solid reminder of the days when Monopoli was an influential town in the region south of Bari.  In Piazza XX Settembre you will find the church of San Domenico a reflection of the rich cultural heritage of the town between the fifteenth and eighteenth centuries. Built inside the city walls it replaced the original church outside the city walls that was destroyed by the Venetians who ‘rescued’ the town from the Spanish army. This new church features three different styles Baroque, Gothic and Renaissance. The pretty church of Santa Maria degli Amalfitani in Vico Amalfitana is famous for its Rupestrian crypt reputedly carved out of the rock by a group of sailors from Amalfi and dedicated to the Virgin Mary in thanks for surviving a shipwreck. The church itself was built in the first half of the twelfth century by people from Amalfi when their maritime republic was prospering and Puglia was under its protection. 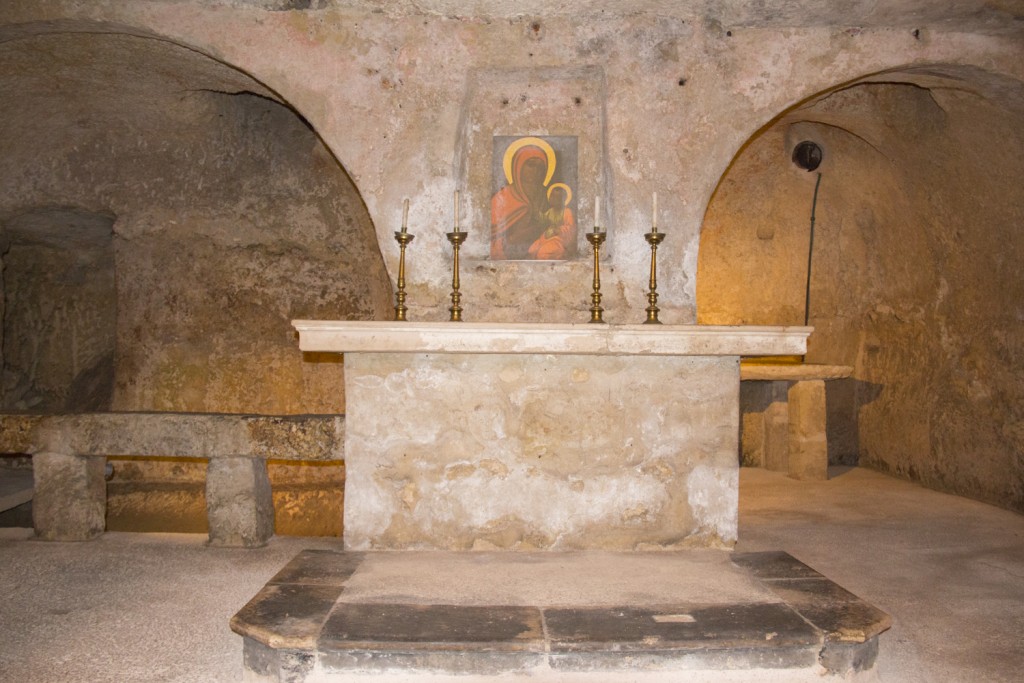 An excellent place for lunch, close to the old harbour, is La zi Otavio a traditional restaurant that serves local cuisine such as the famous orecchiette con le cime di rapa http://www.laterradipuglia.it/ricette-pugliesi/ricette-di-primi-pugliesi/le-orecchiette-pugliesi/orecchiette-alle-cime-di-rapa – ear-shaped pasta served with ‘turnip tops’ and a sprinkling of bread crumbs. The cuisine of Puglia is known as the cucina povera or the poor cuisine which makes good use of fish, offal and vegetables. The bread is the best in the country and the regional speciaility taralli – small crispy pretzels – are addictive. In Puglian restaurants it is customary to offer diners a small appetizer such as a small platter of raw vegetables or miniature bruschette. 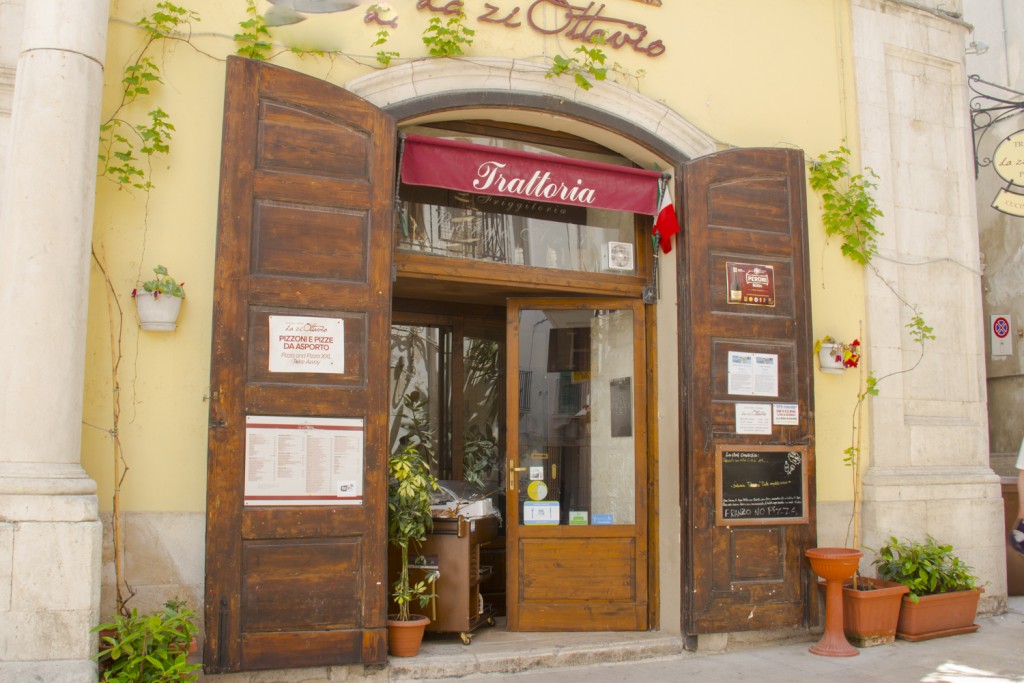 The streets will have emptied while you are eating and will remain so until the daily siesta is over. This is the ideal time to take a leisurely stroll around the marina to the cathedral, Basilica Cattedrale della Madonna della Madia.  This Romanesque, seventeenth-century building features outstanding Baroque architecture and a breath-taking marble interior which includes a thirteenth century icon of the saint to which it is dedicated the Madonna della Madia. During the night of 16 December 1117 an image of the Madonna floated into the port of Monopoli together with some strong beams that were subsequently used to repair the damaged roof of the Cathedral. A miracle that is re-enacted every year in the town. 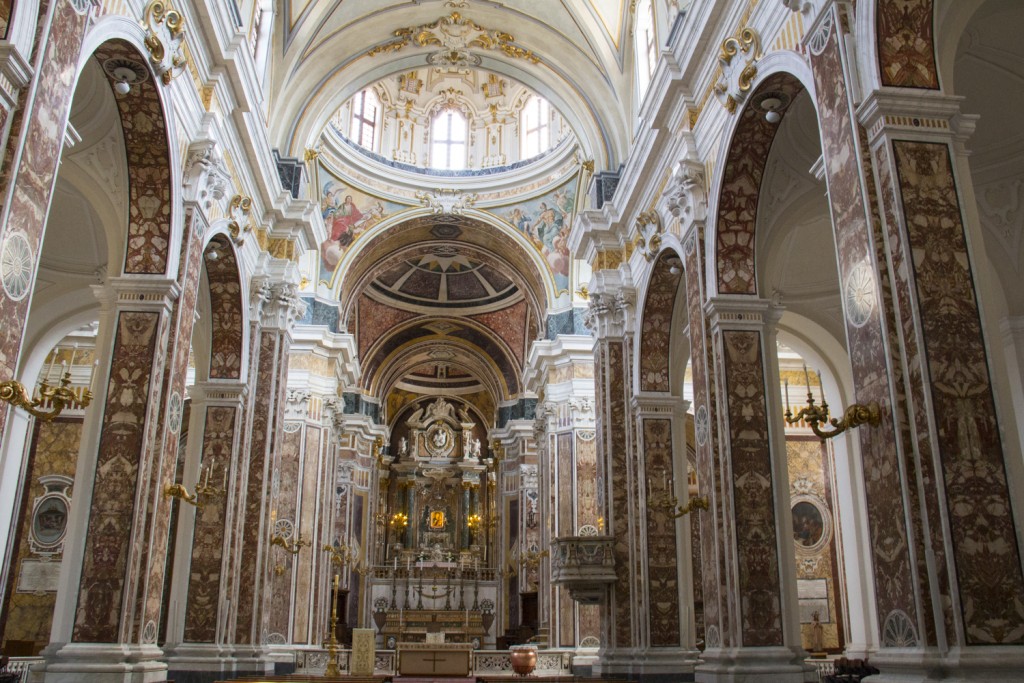 A short distance away in Via Argento is the bizarre Chiesa S. Maria del Suffragio (il purgatorio)  that celebrates the cult of death and includes a display of the mummified bodies of eight brothers – a popular attraction for the traditional promenaders who flock into the town as evening approaches. The town is transformed into a frenzy of activity as cars circle like predators looking for spaces to park. The streets around the huge Piazza Vittorio Emmanuele II are closed so pedestrians can wander where they will. Bright lights on the roundabouts illuminate the large open are surrounding them and their music blends with the shrieks of excited children as whole families traverse the square on their bicycles. 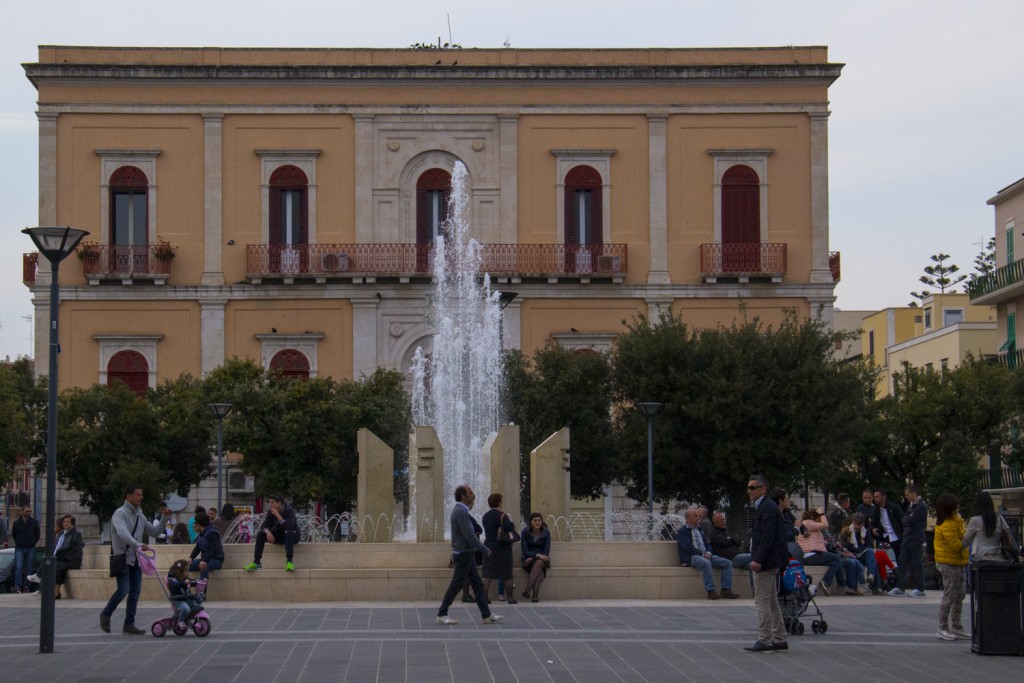 Enjoy a pre-prandial stroll around the old harbour which will be buzzing with locals meeting and greeting as they stroll beside the water enjoying the cool sea breeze. Turn into Piazza Garibaldi to enjoy an aperitivo. Just around the corner on Via Amalfitiana the popular Trattoria Pierino l’Inglese is a good venue for dinner but you will probably find a queue of Italians waiting for it to open! Do not be deterred by this as they will find space for everyone. The trofiette (pasta) with a sword fish sauce is delicious especially when accompanied by a glass of the local wine, the white Verdeca maybe? Back in the Piazza Garibaldi the Premiato Caffè Venezia will be throbbing with life (and maybe music) a stark contrast to the peaceful square of the morning. Join the throng of people around the shop-front of the gelateria Babbi all shouting out flavours of their delicious organic ice creams – it may be a while before your voice is heard but it is worth persevering. 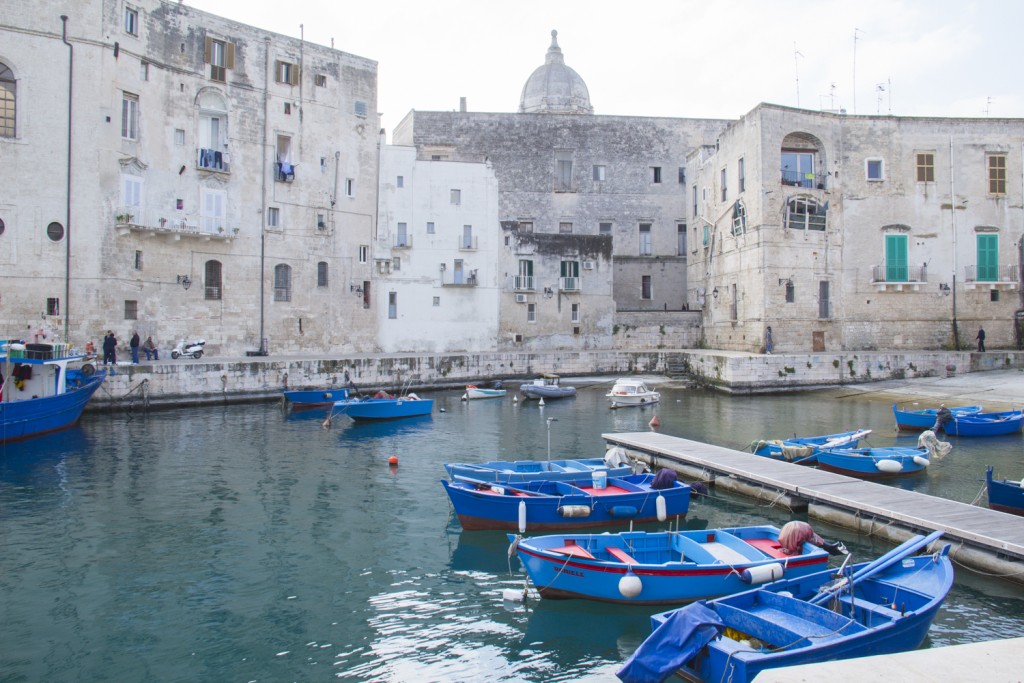 The old port in Monopoli, Puglia in Italy

So what are you waiting for? Pack your small case, buy a return ticket to Bari or Brindisi with Ryanair from Stanstead or to Bari with British Airways (hand luggage only) from Gatwick, or Easyjet from Gatwick to Bari.  Monopoli is on the mainline between Bari and Brindisi. There are not many hotels in the town but there is plenty of bed and breakfast accommodation (see Booking.com) offering a very genuine old town experience in the maze of narrow streets that remain true to their origins. Another option would be the luxurious Masserie a mixture of a castle and a farm only found in this region – a good example is the Hotel Masseria Donnaloia on the outskirts of Monopoli where you can treat yourself to a complete Puglian experience. Spring (and autumn) is the ideal time to visit before the weather gets too hot sun and the Italian tourists have not yet arrived. 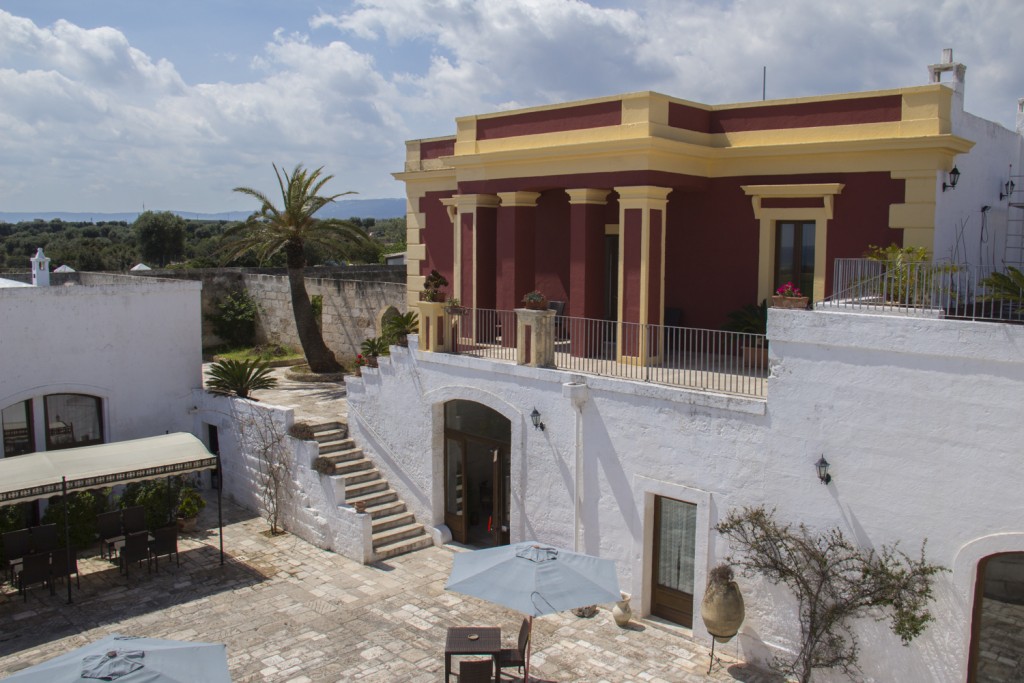 A masseria, Hotel Masseria Donnaloia, near Monopoli in Puglia, Italy