2012 marks the tenth anniversary of the Saltaire Festival, an occasion designed to commemorate the creation of the village 150 years ago.

The ten days of celebrations are full of all kinds of activities, events and shows with something for everyone old and young. With so much going on, here’s a guide to some of the things the festival has to offer.

The village of Saltaire was originally founded in 1851, by one of the leaders in the woollen industry in Yorkshire, England, Sir Titus Salt. Sir Titus moved his entire operation (five mills) to a nearby site in Shipley so that all his workers could be situated in Saltaire (which was named after a combination of its founder and the nearby river).

The workers were treated to the luxury of immaculate stone cottages, nearby bathhouses and wash houses with tap water as well as a hospital, library, museum, billiard room, concert hall, gymnasium and science lab. There was also a school for the children, with allotments, a boathouse, a park and a Congregational Church.

In 2001, UNESCO designated the village a world heritage site, which means it, must be preserved and protected. Saltaire is viewed as one of the most important model village’s still standing from the Victorian era. 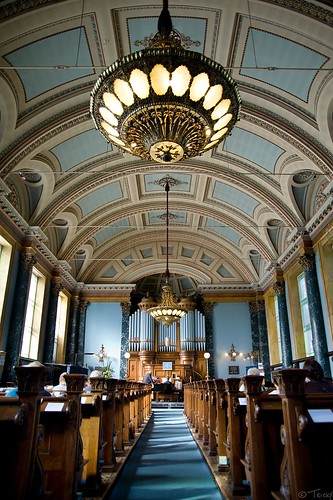 The stunning Grade 1 listed church erected in 1859 by Sir Titus for his workers, opened for the Saltaire Festival, complete with organist!

Unsurprisingly, the Saltaire Festival features many events to celebrate the village’s wonderful history as well as bring visitors closer to the beautiful parks and gardens.

For history buffs, the Symposium on the First Lords of Saltaire, a joint effort from the History Club and the families of the original founders, due to take place on  Saturday 15 September, could provide a fascinating way to spend a couple of hours.

The exhibition of the Salts Mill Workers on 9 September offers a revealing insight into the lives of the workers and features black and white photographs as well as a film of a worker’s outing in 1953.

On the weekend of 8-9 September, Saltaire Open Gardens provides an open air trail for visitors to follow to enjoy the sights and sounds of the village.

Whatever type of beats get you tapping your feet, you are sure to find something to enjoy. Music is an integral part of the Saltaire Festival and there are countless free and ticketed shows throughout the whole event.

Some of the highlights include a bandstand event on Sunday 9 September, free to attend, whilst on the same day and the following Sunday there is also a jazz and swing band concert. Hank Wangford and the Lost Cowboys is an act which is sure to draw in the crowds with their distinctive blend of melancholy and emotion, whilst a seven-piece group from Orkney offers folk music featuring irresistible wildfire fiddles.

The Plazza Stage also provides a weekend of free music with everything from tribute acts, pop, jazz and soul.

There is plenty of music throughout the whole Festival from formal ticketed affairs to street bands and performances.

Undoubtedly the headline event of this category is the Stuart Maconie show, featuring the well known journalist, radio presenter and author. Sit back for an evening of irreverent entertainment on Thursday 13 September.

Pappy’s is a sketch troupe which won accolades at the Edinburgh Fringe Festival, who are now bringing their unique brand of comedy to Saltaire. A show of the adult variety, not suitable for the under 16s.

There are also a number of authors who are hosting events to give audiences the chance to learn more about their inspirations as well as the opportunity to ask any burning questions they may have. Novelists include Stephen May, mother and daughter duo P J Quinn as well as Alwyn Turner.

Something for the little ones

But Saltaire festival is not all about entertainment for the grown-ups. There are a number of events being hosted specifically for the younger members of the family.

For little hands that like to be kept busy, on Saturday 8 September, children of primary school age can enjoy their very own ‘quick sculpture’ class. Free to take part, all materials are provided and parents who don’t mind getting messy hands are free to join in, or can simply sit and watch. And the best part of all is that your children’s creations can go home with you at the end of the day.

Sunday 9 September has a lot to offer families. Games in the park are planned between midday and 1pm which will be sure to get older members of the family jumping out of their seat too with more traditional, retro games such as hopscotch and skipping. Later in the day, the village holds its very own Teddy Bear’s Picnic so make sure you bring along a furry friend from home to enjoy the tram ride and compete for the prize of Best Dressed Bear.

The 10th Saltaire Festival has so much to offer – with numerous food festivals, exhibitions, arts and crafts as well as dance and film. Many events are free for everyone to attend so for a chance to celebrate a little bit of Britain’s history and have a great time too, head down to Saltaire between 6 and 16 September 2012.